The History of Pedersen Funeral Home

Ken and Merrill Pedersen began serving families in 1963. Originally from the Morris area, the Pedersen brothers soon established a reputation for excellence in providing professional funeral services to the community.

In addition, Ken and Merrill, and their staff provided an ambulance service to the community, with both businesses being operated out of the Pedersen facility, then located at East Sixth Street and California Avenue in Morris.

In February of 1986, a new chapel was added to the existing funeral home and a remodeling of the entire facility was completed. From this expanded facility, the Pedersen brothers served the Morris area until January of 1992, at which time they partnered with Tom Vertin and Vertin Family Funeral Homes, a long time Pedersen acquaintance and third generation funeral director from Breckenridge, Minnesota.

The Vertin family partnered with the Pedersen brothers to continue the Pedersen tradition of service to area families, and in November of 1995, they named Jay Dietz to assume the managerial responsibilities. Jay and his wife, Chandel, along with their children, have been residents of Morris since that time. Dietz states, “We were immediately welcomed into this community, and it has always felt like home”.

Design and construction of the new funeral home building, located at 101 South Atlantic Avenue in Morris, was completed in 1998.

In 2013, Shane Decker took on the role of manager at Pedersen and Starbuck Funeral Homes. Shane and his family have made Morris their home, and they feel this is where they are meant to be.

The History of Starbuck Funeral Home

A second funeral home was operated in Starbuck by the Farmer’s Cooperative Mercantile Company, under the management of E.P. Byhere. This business was sold to Irving Helgeson and Chester F. Peterson in 1932, and they opened the Starbuck Funeral Home on November 9, 1933. In 1955, a new funeral home was built in the south part of Starbuck. After twenty-four years in this partnership, Mr. Helgeson sold his interest in the funeral business to Mr. Peterson, who continued to own and operate the funeral home until 1971. Donald M. Nelson owned and operated Starbuck Funeral Home until October 15, 1998, when he sold the business to Thomas M. Vertin. This cooperative venture was aimed at continuing the Starbuck tradition of personalized, professional service that you and your family have come to expect. Together, our staff and owners promise to operate the funeral home with the same sense of compassion and courtesy. 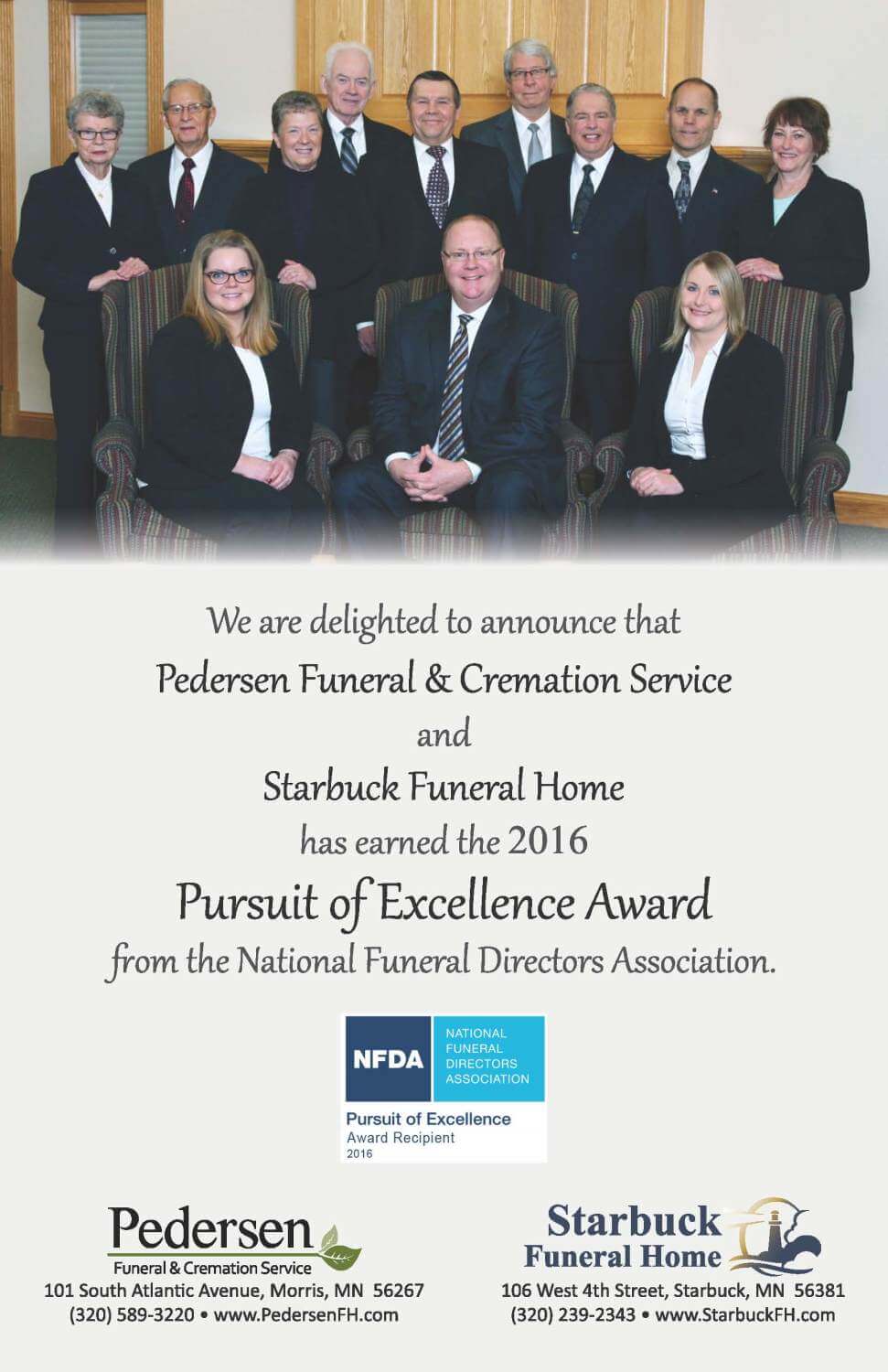 We are always interested in hearing from the families that we serve.  Please take a moment to let us know how well we served you in your time of need. We very much appreciate your feedback.

The staff at the Starbuck Funeral Home bent over backwards (mainly Brooke) to answer any questions we had...from the night of our mother's passing to the actual burial a week after the visitation and funeral. Brooke was a total pleasure to work with, answering any & all questions. She expressed great empathy toward my siblings and mom's friends, neighbors, grandchildren/extended family - mom's sister, nieces, nephews, etc.

The staff at Pedersen was amazing, they showed true compassion and made us feel at ease through the whole process. Thank you so much!

We would like to thank you for all you did for us as we made funeral arrangements for dad. Thank you for the kindness and concern shown us during this time of loss. Your staff handled the COVID-19 situation professionally and treated us with kindness, patience and dignity. These are unprecedented times and we thank you for making it go as smoothly as possible.

A year of daily grief support

Our support in your time of need does not end after the funeral services.  Enter your email below to receive a grief support message from us each day for a year.  You can unsubscribe at any time.