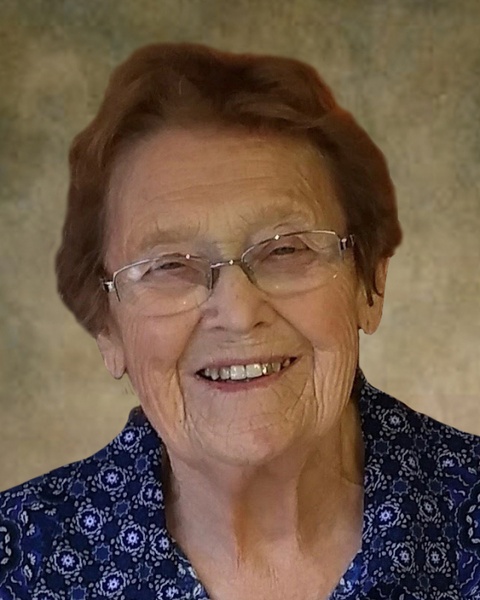 Service attendees are asked to follow social distancing guidelines.  Masks are not required, but recommended.

Adeline Clarice Lundebrek was the oldest of 17 children born to Adolph and Clara (Gulbrandson) Lundebrek.  She was born on October 28, 1930, in St. Paul, Minnesota.  Adeline was raised on a farm in Langhei Township, Pope County.  She was baptized at Lake Hazel Lutheran Church in rural Benson and confirmed at Our Savior’s Church in Benson.  She received her education at District 65 Country School until the 8th grade and then Benson High School until the 11th grade. Adeline made the decision not to finish high school, but to stay home and help her mother care for her younger siblings.  In 1950, Adeline met John “Jackie” Johnsrud at the Lakeside Ballroom in Glenwood.  The two were married on September 29, 1951 at Lake Hazel Lutheran Church in rural Benson.  Following their marriage, they made their home on the farm in White Bear Lake Township where they started and raised their family.  To this union, six children were born. They remained on the farm until moving into Starbuck.  Following Jackie’s death, Adeline became a resident at Minnewaska Lutheran Home where she lived until her death.

Adeline was a member of St. John’s Lutheran Church and then Fron Lutheran Church.  She was active in the Ladie’s aide at both churches and taught Sunday school at St. John’s.  She was also a member of the MLH Auxiliary.   She enjoyed sewing, making much of her children’s clothes; gardening, baking – especially her famous sugar cookies, keeping a neat, clean and tidy house, and attending her children and grandchildren’s sporting events.  Most importantly, Adeline’s life always involved caring for others, evident as a young teen and continued until the day she died.  She always made sure that everyone was safe and well fed.  She loved taking care of her family, who, in later years, she lovingly referred to as “her people.”

Adeline died on Friday, June 19, 2020 at the Minnewaska Lutheran Home in Starbuck.  She was 89 years old.

Starbuck Funeral Home in Starbuck is in care of arrangements for Adeline.

To order memorial trees or send flowers to the family in memory of Adeline Johnsrud, please visit our flower store.