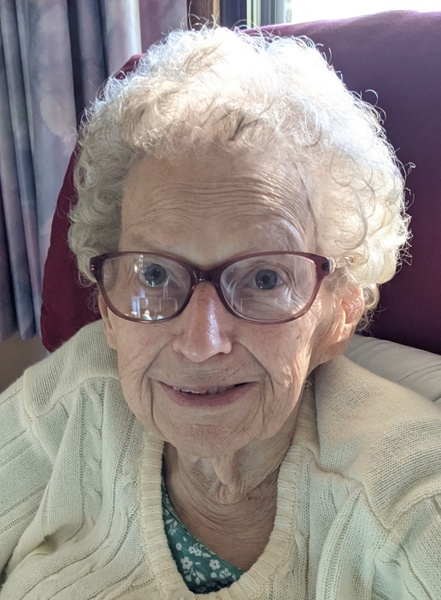 Aeda Irene Loring was born on March 26, 1929 to Clair and Marie (Fisher) Loring in Palmerton, Pennsylvania.  Aeda grew up in the Palmerton area and attended school at Blairsville High School.  Following her schooling, she was united in marriage to Raymond Hill on April 17, 1946.  They made their home in Black Lake, Pennsylvania and later Medina, New York where they raised their children.  Aeda also worked for local farmers during the harvest, a bakery and a shirt factory.  Raymond died in 1985.  Aeda continued to live in New York until 1988 when she moved to Chokio, Minnesota to be closer to her son, Roger.  She continued to live in Chokio until the time of her death.

Aeda enjoyed all crafts, cross stitch, and crocheting – especially afghans.  Aeda spent time doing puzzles, sudoku, and adult coloring books and could often be found watching her soap opera, The Bold and the Beautiful.  She liked cardinals and collected many figurines of them.  Most importantly, Aeda cherished the time that she was able to spend with her family, especially on their family camping and fishing trips.

No local services for Aeda will be held and burial will take place at Bates Road Cemetery in Medina, New York at a later date.

Pedersen Funeral Home in Morris is in care of arrangements for Aeda.

To order memorial trees or send flowers to the family in memory of Aeda Hill, please visit our flower store.