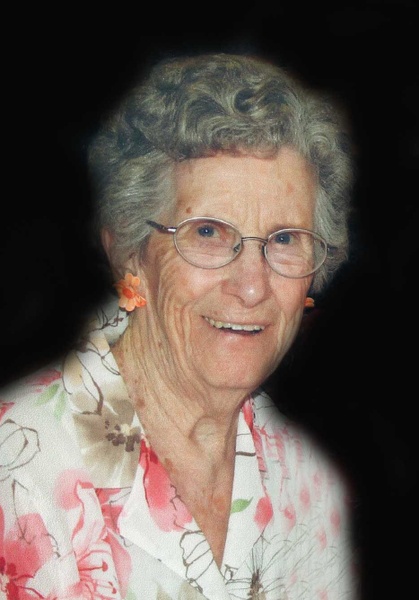 Funeral services for Alice Hickman Jaeck of Morris will be Friday, February 19, 2016 at 10:30 a.m. at Federated Church in Morris, with Reverend Lauren Snell officiating. Visitation will be Thursday from 5 to 7 p.m. at the Pedersen Funeral Home in Morris and for one hour prior to services at the church on Friday. Burial will be in Summit Cemetery in Morris.

Alice Gwendlyn Sax, daughter of Irwin and Margaret (Clark) Sax, was born February 8, 1921 in Rendsville Township in Stevens County, Minnesota, where she grew up and began her schooling at District #39. She continued her schooling at the West Central School of Agriculture in Morris, graduating in 1939. Following her schooling, Alice worked in Morris at the National Tea Grocery Store and later at the variety store. She later left Morris and moved to Minneapolis, where she continued working in a variety store. On March 4, 1941, she was united in marriage to John Hickman in the Federated Church Parsonage in Morris. The couple farmed and raised their two sons, John Jr and Gary in Morris Township. John passed away on October 8, 1985. Alice left the farm three years later and moved to Morris. In 1993, she married Harold Jaeck. Alice and Harold continued to live in Morris. Harold died on February 3, 2008. Alice has continued to make her home in Morris until the time of her death.

Alice enjoyed riding her own snow mobile in the winter months, ice fishing, summer fishing on Big Pine Lake, where they had their own cabin, gardening her huge flower gardens, quilting and sewing. She especially enjoyed spending time with her family and friends.

Alice died on Tuesday, February 16, 2016 at the age of 95 at the Barrett Care Center in Barrett, Minnesota. To order memorial trees or send flowers to the family in memory of Alice Jaeck, please visit our flower store.