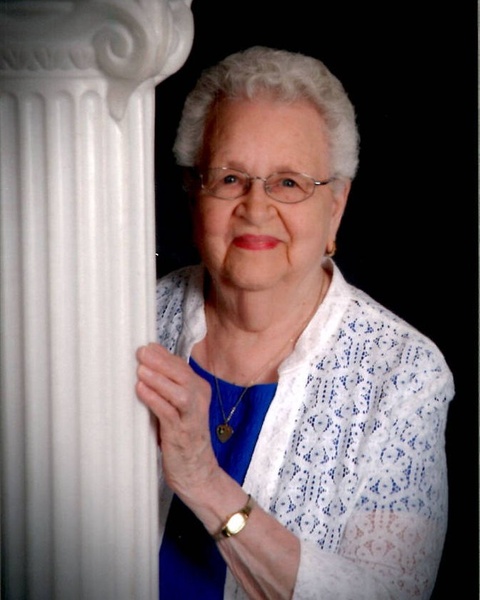 Anna Sylvia Aaberg, daughter of John and Lena (Nygaard) Aaberg, was born August 9, 1928 at her home in rural Starbuck, Minnesota.  She was baptized and confirmed at Immanuel Lutheran Church.  Anna attended District 42 country school and graduated from Starbuck High School in 1946.  She was united in marriage to Clifford Berg on June 14, 1947 at the Indherred Lutheran Church Parsonage. Following their marriage, the couple lived in several locations before settling in Starbuck in February of 1956, where they raised their four children.  In 1973, the family moved to a farm South of Starbuck.  Anna worked at Super Pete’s Grocery Store in Starbuck.  Clifford passed away June 19, 1981.  In 1982, Anna sold the farm and moved to Starbuck.  Anna continued to work at the grocery store for forty years, retiring from Tom’s Food Pride at the age of 79! Anna continued to live in Starbuck until the time of her death.

Anna was a very active member of Fron Lutheran Church.  She enjoyed reading, traveling, playing bingo, puzzles and doing word find books.  Her specialties were making lefse and donuts.  Anna enjoyed several bus trips and even a cruise with many of her friends.  She also took two trips to Norway, one of them with her two sisters, June and JoAnn where they were able to meet up with cousins of theirs.  Anna was very proud to speak fluent Norwegian. Most of all, Anna loved spending time with her family, especially her great-grandchildren.

Anna died Tuesday, October 11, 2022 at the Glenwood Retirement Village in Glenwood, MN.  She was 94 years old.

Starbuck Funeral Home in Starbuck is in care of the arrangements for Anna.
To order memorial trees or send flowers to the family in memory of Anna Sylvia Berg, please visit our flower store.
Berg, Anna.pdf
Open