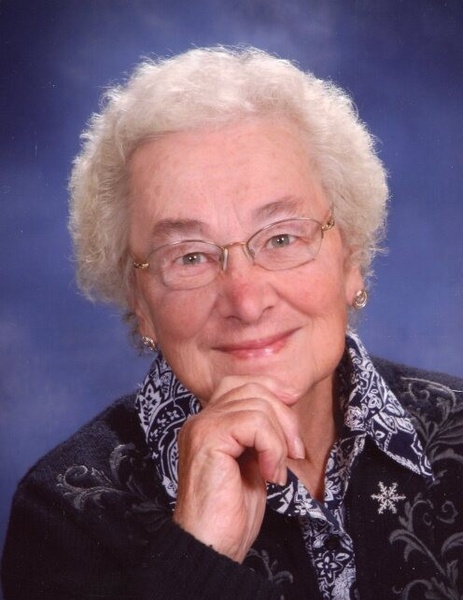 A public memorial service will be held for Arlene Gulbrandson on Friday, October 30, 2020, at Kongsvinger Lutheran Church in Donnelly at 11:00 a.m. with burial at Kongsvinger Cemetery following. A public visitation will be held on Thursday, October 29, 2020, at Pedersen Funeral Home in Morris from 5:00-7:00 p.m. The church's social distancing and capacity guidelines allow for a limited number of guests inside the church building, there will be a live broadcast over 98.5 FM in the church parking lot. There will be a live stream of Arlene’s memorial service starting at 11:00 a.m. on Friday, October 30, 2020.  To view the service on the Pedersen Funeral Home website, scroll to the bottom of Arlene’s page and click the link.

Arlene Amanda Gulbrandson, daughter of Amanda (Kunze) and Emil Haack, was born on September 25, 1930, in Roseville Township. She attended Hoffman High School and graduated on June 2, 1949. She was baptized on October 10, 1942 and was confirmed on September 9, 1951. After high school, Arlene met Wilbur G. Gulbrandson in the neighborhood and they were united in marriage on October 28, 1950. They were happily married for the next 58 years and lived on the family farm in Herman. Out of this marriage they had three surviving children: Gary, Jeff, and Jeanne. Throughout her life, Arlene was a busy housewife raising kids, helping with the farm, and cooking for many. She was also a member of Kongsvinger Lutheran Church and the Ladies Aid. Wilbur passed away on May 13, 2009. Arlene continued to live on the farm until 2017 when she moved to West Central Christian Homes and after, the Barrett Assisted Living. She was there until recently and spent her final days at Westwind Village.

Her hobbies included playing cards, mostly Whist, embroidery, playing Word Search, cooking, and spending quality time with her children and grandchildren. She was known to have the gift of hospitality and will be a dearly missed mother, grandmother, great-grandmother, and friend.

Arlene passed away on Tuesday, October 27, 2020 at West Wind Village in Morris, at the age of 90 years old.

To order memorial trees or send flowers to the family in memory of Arlene Gulbrandson, please visit our flower store.