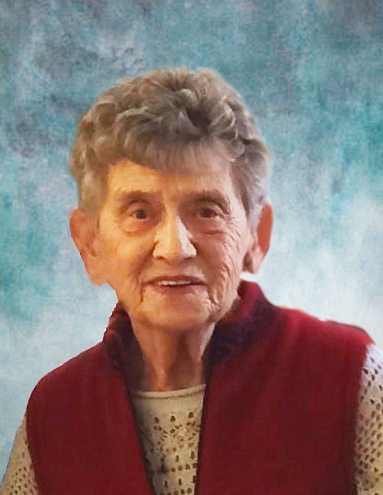 Funeral services for Arlis Kloos of Hoffman, MN will be held at First Lutheran Church in Morris on Tuesday, September 25, 2018, at 11:00 a.m., with Reverend Dan Belgum-Blad officiating. Visitation will be one hour prior to services at the church. Burial will be in Summit Cemetery in Morris.

Arlis Margaret Estenson, was born November 7, 1926, in Elbow Lake Township, Grant County, Minnesota, the daughter of Gilbert and Theoline (Solum) Estenson.  She was baptized and confirmed at West Elbow Lake Lutheran Church.  After graduating from high school in Elbow Lake, Arlis received training and worked for the Atchison Topeka Santa Fe Railroad as a teletype operator in Minneapolis, and later in New Mexico.  Returning to Minnesota, she worked as a County Extension Agent in various counties and was very successful in promoting 4H.

Arlis and Charles Brett Kloos were united in marriage September 3, 1948 in Elbow Lake, MN. They made their permanent home in Roseville Township, rural Hoffman, where they farmed and raised their family. Arlis was a loving wife, mother, and homemaker; actively supporting Charles and the farm.  After Charles’ death Arlis continued to maintain the farm and remained district manager for Jacques Seed Company.

Arlis was a member, active in the ladies aid and church youth groups, of Lands Lutheran Church, Hoffman. She was also church organist and choir director for many years. Arlis was a member of First Lutheran Church, Morris, where she continued her love of music as organist, as well as being involved with various church committees. Arlis was a member of Minnewaska Chapter No. 129 O.E.S., holding many chapter and national offices; highlighting her musical career as Minnesota Grand Organist in 1983.  Music, family, church, and Eastern Star were the driving force throughout Arlis’ life.

Preceding her in death were her parents; her husband Charles, who died June 19, 1986; one brother, Harlan Estenson; two sisters, Corrine Pederson and Lindie Soliah; one son-in-law, Jeffrey Jacobson and one granddaughter, Jamie Torson.

Pedersen Funeral Home in Morris was in charge of the arrangements.

To order memorial trees or send flowers to the family in memory of Arlis Kloos, please visit our flower store.