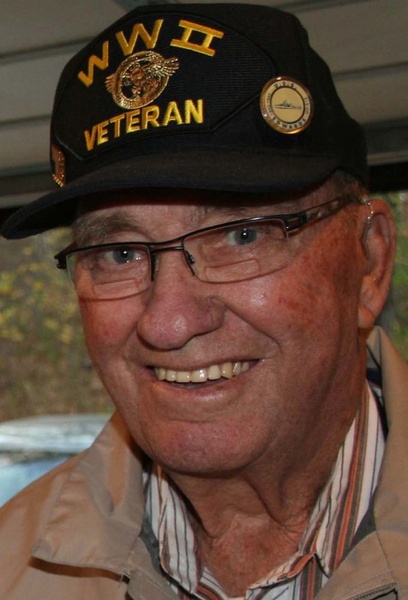 Memorial services for Arnold Rinken of Glenwood, MN will be Saturday, April 28, 2018 at 11:00 a.m. at Chippewa Falls Lutheran Church in Terrace, MN, with Reverend Bonnie Lomen officiating. Visitation will be one hour prior to services at the church. Burial will be at a later date. Glenwood V.F.W. will provide military rites.

Arnold Max Rinken, born November 21, 1923 in Peterson, Iowa, to parents, Ben and Minnie Rinken. He is fifth of nine children. Arnold has two sisters living; Catherine Powers of Fargo, ND and Gladys Johnson of Dimmitt, TX. He was baptized in Iowa and confirmed at Trinity Lutheran in Brooten. He was a member of Chippewa Falls Lutheran Church in Terrace.

Arnold moved to a farm south of Sedan in November 1940. He entered the Navy in January 1942 and was discharged in November 1946. He served on the USS Edwards in the Pacific. He worked in the Civil Service in Norfolk, Virginia. He was joined in marriage February 7, 1946 to his sweetheart, Virgy Carolyn Eskelson in Charleston, South Carolina. They farmed in Sedan and owned Rinken’s Bus Service in Glenwood for 40 plus years. After retirement they resided to Ottertail right on the river, a fishing paradise. They moved back to Glenwood living in an apartment on the old football field, at about the 50 yard line.

Arnold’s passion was fishing year-round. He also enjoyed hunting with his son, as well as many others. He never gave up on the Twins or Vikings all those years. He loved watching sports from the Pros to his children. He helped sponsor R&R Fastpitch team for many years. He loved watching westerns, we would get a narrative of the entire show! He loved his family from the bottom of his heart and was so proud of ALL of them.

Arnold died peacefully at his home, surrounded by his family on Friday, April 13, 2018. He was 94 years old.

To order memorial trees or send flowers to the family in memory of Arnold Rinken, please visit our flower store.