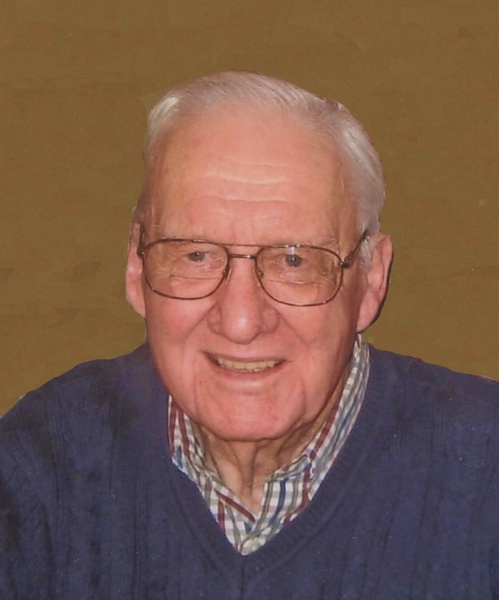 Memorial services for Arthur "Art" Millerbernd, of Starbuck, MN will be held on Saturday, February 4, 2017 at 11:00 AM at the Starbuck Funeral Home in Starbuck. Father Joseph Vandeberg will be officiating. Visitation will be held on Friday, from 5-7 pm at the Starbuck Funeral Home and for one hour prior to the service on Saturday. Burial will be at a later date.

Art was born June 16, 1921, in Hutchinson, MN to Anton and Agnes (Zimmermann) Millerbernd. He attended Renville schools and graduated from Renville High School in 1939. He worked in road construction from 1939-1944. Art married Alice Lippert in 1944 at Olivia, MN. Art and Alice farmed in Renville after their marriage until 1965. They moved to Starbuck in1965 when Art became an employee of the MN Department of Agriculture. He held the position of an Agronomy Services Inspector until retiring from the state in 1991. Art remained living independently in his Starbuck home until his passing.

Art and Alice were avid Starbuck sports fans. Art enjoyed taking pictures of local athletes which he shared with their families. His grandchildren were his pride and joy as he remained involved and interested in all aspects of their lives. He maintained an ongoing interest in both national and local politics, enjoying the PBS NewsHour. He served on the Starbuck Public School Board of Education and the White Bear Lake Township Board. His other hobbies included fishing, coin collecting and furniture refinishing.

Art is survived by his children: Nancy (Wally) Hood of New London, Mary Ann Wilke of Henning, Jean (Doug) Noss of Sartell, and Tom (Mel) Millerbernd of Littlefork, MN; seven grandchildren; six great-grandchildren; brothers-in-law: Don Lippert, Roger Lippert, Tom Lippert and sisters-in-law: Pat Thein and Mary Lippert. He was preceded in death by his parents Anton in 1935 and Agnes in 1957; wife Alice in 2003; sister: Marcella in 1999, brother: Marcel in 2000; son-in-law: Lance Wilke in 2012 and many other relatives.

A special thank you to the staff of Glacial Ridge Hospice and all the many others who helped Art fulfill his wish of staying at his home until his passing. To order memorial trees or send flowers to the family in memory of Arthur Millerbernd, please visit our flower store.