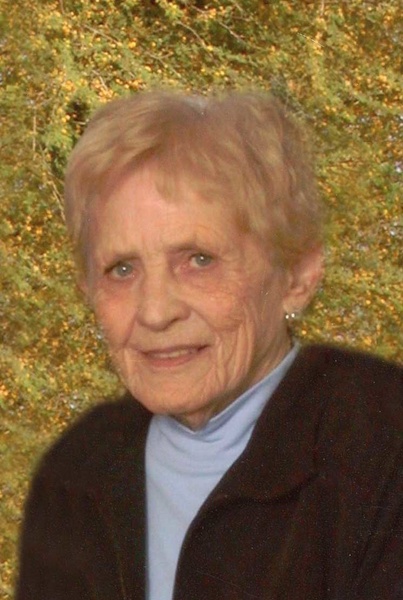 Funeral services for Audrey Evjen Nelson of Starbuck, MN will be Tuesday, May 10, 2016 at 2:00 p.m. at East Zion Lutheran Church, rural Starbuck. Visitation will be one hour prior to services at the church on Tuesday. There will be a private family burial at a later date.

Audrey Gwendolyn Evjen, daughter of Alfred and Dagney (Pederson) Evjen, was born April 13, 1929 in Langhei Township in Pope County, Minnesota. She was baptized and confirmed at East Zion Lutheran Church. Audrey attended country school and later graduated from Starbuck High School in 1947. Following her graduation, Audrey moved to the Twin Cities area to continue her education. She married Arvid Tonn in June, 1948 at East Zion Lutheran Church in Starbuck, MN. The couple made their home in the St. Paul area where they started their family of five children. Audrey held various jobs throughout the years until she was hired as the city clerk for the St. Paul Lighting Bureau. On March 12, 1968, Audrey was united in marriage to Melvin Nelson. The couple continued to live in the cities until 1977, when Audrey retired from the bureau and the couple moved to Glenwood and lived on Scandinavian Lake. In 2006, Audrey and Melvin retired to Starbuck, Minnesota where she continued to live until her passing.

Audrey was a member of East Zion Lutheran Church and the VFW Post 4582 Auxiliary. She enjoyed playing cards, fishing, and being able to host events. Audrey was always known for her ability to socialize with others and making anyone feel at home.

Audrey died on Wednesday, May 4, 2016 at the Minnewaska Lutheran Home in Starbuck, Minnesota. She lived to the age of 87 years. To order memorial trees or send flowers to the family in memory of Audrey Nelson, please visit our flower store.