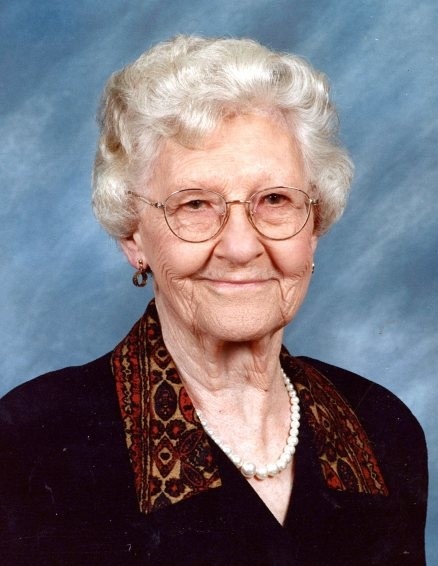 Memorial services for Bernice Barsness of Hancock will be held Friday, August 3, 2018 at 11:00 a.m. at Our Redeemer's Lutheran Church in Hancock, MN, with Reverend Julius Miller officiating. Visitation will be one hour prior to services at the church on Friday. Burial will be in Lakeside Cemetery in Hancock.

Bernice Lucille Wiese, daughter of Frank and Marie (Clausen) Wiese, was born April 15, 1918 in a home on Lake Emily in Walden Township in Pope County, Minnesota. Her family lived in the Hancock area and Bernice attended Hancock Public Schools, graduating in 1936. On January 17, 1937, she was united in marriage to Sherman Barsness at the Immanuel Lutheran Churh parsonage near Starbuck. Following their marriage, they farmed in the Hancock area. In 1955, the couple purchased their farm south of Hancock, where they raised their children. Sherman died on January 12, 1981. Bernice continued to live on the farm. After their kids graduated, Bernice began working at Fingerhut in Benson; took seasonal jobs in the area and also cleaned at West Wind Village for a time. Bernice continued to live on the farm until the fall of 2016 when, at the age of 98, she moved into West Wind Village, where she has continued to live until the time of her death.

Bernice was a member of Our Redeemer’s Lutheran Church in Hancock, where she was part of WELCA. She enjoyed watching and listening to Minnesota Sports, especially the Minnesota Twins.  She liked taking care of her yard and gardening. She loved to have people stop by and visit, especially her family and grandchildren. Bernice was an excellent cook and enjoyed baking.  Bernice’s heart was always in farming despite its many challenges and demands.  Bernice’s smile revealed her kind, considerate, gracious and giving nature.

Bernice died on Wednesday, July 25, 2018 at the Stevens Community Medical Center in Morris, MN. She was 100 years old.

To order memorial trees or send flowers to the family in memory of Bernice Barsness, please visit our flower store.