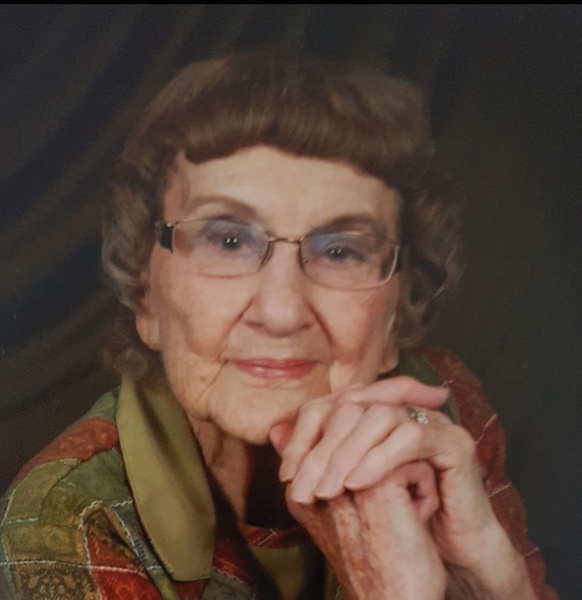 A memorial service will be held on Tuesday, May 30, 2017, at 11:00 a.m. at Springfield Area Community Center at 33 S Cass Avenue, in Springfield, Minnesota. Visitation will be one hour prior to the service at the community center. Burial will be at the Springfield City Cemetery.

Berniece Esther (Sydow) Maurer, Age 97, died peacefully on May 16, 2017, at Skyview in Morris, MN. Berniece was born on May 2, 1920, in Stately Township, Sanborn, Minnesota, to Lizzie (Louise) Johanna Pauline (Yungerberg) Sydow and Fred (Ferdrick) Gustof Sydow Jr.. She was Lizzie and Fred’s only child and she was born in and lived in the farmhouse on 450th Avenue in Sanborn for most of her life. She attended a nearby country school for grades 1-8, skipping at least grade 2. There was no school transportation, so she attended 9th through 12th grade in the City of Sanborn while living with various families. At age 16, she graduated from Sanborn High School. She attended secretary school in Mankato for two years, but was unable to find a job. She went back to Mankato and graduated with a teaching degree at age 22 in 1942.

During and in-between attending college, Berniece met up with Dorvin Maurer at a dance in Sanborn. He asked if he could take her home and they started having regular Saturday dance dates. In 1942, he enlisted in the U.S. Marine Corps. While he was away, she received a package that stated, “I love you. I want to marry you.”

Her first teaching job was in a country school near Morgan, MN. The next year, she taught at MN Country School #7 near Springfield. In 1945, Dorvin was discharged from the Marines and returned to the Springfield area. On January 21, 1946, Berniece married Dorvin Luellyn Maurer in Springfield, MN. For one year, they lived in Springfield, after which they moved out to the farm. In 1950, when her oldest daughter, Linda, was three, Berniece began teaching at the country school that was one half mile from the farm. She retired from teaching in 1953 when her second daughter, Debra, was born. Along with raising two daughters, she meticulously maintained all the records for the farm.

Berniece was a consummate and gracious cook and hostess. Dorvin was one of eight children and the farm became the meeting place for most family gatherings and special occasions. As much as she loved the farm, she also loved traveling. While Dorvin was employed by Security Seed Company, Berniece traveled with him to Ireland, Europe, Alaska, Panama Canal, Hawaii, and Costa Rica. During that time, they also visited China and Russia. After Linda and Deb were in retirement, Berniece traveled with them to California wine country, southern France, Florida Keys, Martha’s Vineyard, Britain, and Sanibel Florida. In 2009, Berniece moved from the farm to a patio home in Springfield, MN.

Berniece was a fierce defender and advocate for everyone in her family. She was an avid reader and always had a book by her chair or nightstand. Prior to moving to Morris, MN, in October of 2015, she enjoyed frequenting Jackpot Junction Casino with her friends, Peggy and Lucille. She loved poetry, romance novels, a strong vocabulary, gardening, flowers, getting letters and pictures, playing cards, entertaining friends, hosting card clubs, and listening to the children, grandchildren, and great-grandchildren play and sing music.

Pedersen Funeral Home (Morris) assisted with arrangements. In lieu of flowers, the family prefers memorials to Morris Library, SWELL, or Springfield Library.
To order memorial trees or send flowers to the family in memory of Berniece Maurer, please visit our flower store.