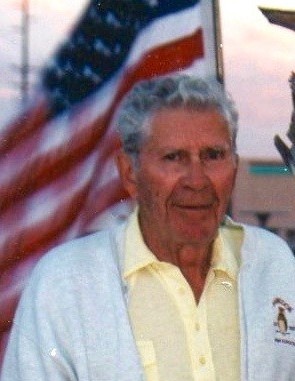 Funeral services for William “Bill” Myers will be private with a public visitation one-hour prior at 9:30 a.m. at the Christian Reformed Church in Hancock on Monday, December 28th. A public visitation will also be held on Sunday, December 27th from 5:00-7:00 p.m. at Pedersen Funeral Home in Morris. There will be a ‘Time of Sharing’ hosted by Reverend Harrison Newhouse at 6:45 p.m. Burial will be held at a later date at Lakeside Cemetery in Hancock.

There will be a live stream of Bill’s Funeral Service starting at 10:30 a.m. on Monday, December 28th.  To view the service on the Pedersen Funeral Home website, scroll to the bottom of Bill’s page and click the link.

William (Bill) Myers was the youngest of three boys, born to Charles & Clara Myers on April 12th of 1926. Bill was raised on the family farm south of Hancock and began his education at a country school. After graduating from Hancock School in 1945, he enlisted in the Army and served in Japan for a year. He was honorably discharged in December of 1946, and he returned home to work on the family farm. He married his hometown sweetheart, Arletta Hazel Anderson, on July 3rd, 1948. To this union, four daughters were born, who in his words “were as good a workers as any guys would have been.” Bill built a house for his family right across from the one he had grown up in, and there he impressed upon his daughters the importance of hard work, doing the best you can the first time around, and finishing any job that you start.

Bill farmed all his life. Of all the farming he did, his true passion was the black Angus herd purchased from his father. Every spring and fall for many years he continued his father’s tradition of herding the cattle six miles from the farm to the pasture. It was a Sunday tradition for Bill and his father, or mother and family, to drive to the pasture and check on his beloved cattle and calves.

Bill also had a passion for reading, particularly anything to do with WWII. Bill was very patriotic and community minded. He held those that served our country in high esteem, and was fortunate to visit Pearl Harbor and take an Honor Flight to Washington D.C. He served on many local boards, including the Hancock School Board, Hancock Co-op, Stevens County Hospital, and the West Central Cattlemen Assoc.

Each July the family would make the journey north to the cabin on Bluewater Lake in Grand Rapids. They enjoyed their time together away from the farm, as it provided a rare time to relax and play.

Bill & Arletta enjoyed traveling. In 1975 they visited their oldest daughter and son-in-law in Australia for a month and had likely visited most of the continental United States. For many years, after retiring in 1991, they would spend part of their winter in warmer climates.

Bill was a good listener. Both strangers and friends found him easy to talk to. He took a genuine interest in other people and could strike up a conversation with anyone.

Bill moved into Legacy Living in Morris in 2018 where he was wonderfully cared for and had come to call home. He loved the country drives his daughters took him on and was always interested in seeing how the crops were doing.  They liked to say, “You can take the man off the farm, but you can’t take the farm out of the man.”

Bill died on Friday morning, December 11, 2020, at the Legacy. He was 94 years old.  He is remembered as a fair, hardworking man of integrity who was always willing to help others and possessed a truly “waste not want not” mentality.

In lieu of flowers, memorials are preferred to Lakeside Cemetery and The Legacy in Morris, Minnesota.

To order memorial trees or send flowers to the family in memory of Bill Myers, please visit our flower store.