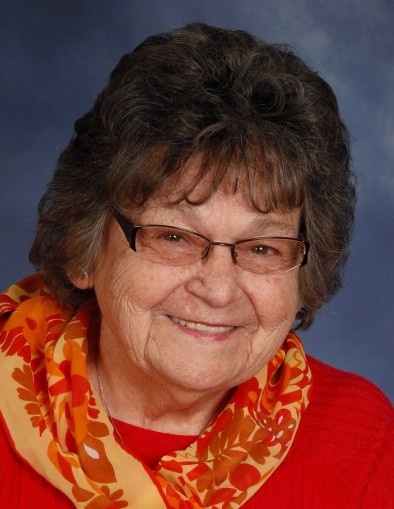 Funeral services for Bonnie Howe, of Chokio, will be held on Thursday, May 5, 2022 at 10:30 a.m. at Our Savior's Lutheran Church in Chokio.  Reverends Micah Tanis and Erik Rundquist will be officiating.  Visitation will be on Wednesday evening, from 4-8:00 p.m. at Our Savior's Lutheran Church and will continue one hour prior to the services at the church on Thursday.  Burial will be at Chokio Lutheran Cemetery.

Bonnie Mae Rupert was born on March 1, 1934, in Illinois to Walter S. and Naoma E. (Genzel) Rupert.  She was raised in the Wedron, Illinois area where she was baptized, confirmed, and received her education.  She met Richard Howe, from Minnesota, the two began dating and were married when Bonnie was 16 at the First Baptist Church in Aurora.  In 1951, they moved to Richard’s hometown and in 1962, they purchased his family farm.  Bonnie lived in the same farm place since she was 16 years old!  After four years of marriage, they welcomed their first child, and would later add four more.  She held various jobs over the years, including: teacher’s aide at the Chokio-Alberta Schools, Gibson/Pamida in Morris, CNA at Morris and Graceville Nursing Homes, driving the Transit bus and postal employee. Her most important and favorite job was being a mother, grandmother and great-grandmother. Richard preceded Bonnie in death on May 25, 2011, after 61 years of marriage.  She continued to live on the farm.

Bonnie was a member of the First Baptist Church in Morris, (she never missed a service), the Operations Splash Committee in Chokio, the Baker Township Friendly 8 Club, and the Chokio Senior Center.  She was very active in several different bowling leagues, never missed an opportunity to go swimming, and seldom passed up a rummage sale.  After Richard’s death, Bonnie continued to send thousands of birthday and anniversary cards to many people in the area – the Chokio Post Office and the many people that received the cards are sure to miss all of the cards!  Her children and friends will miss her daily phone calls. She and her group of friends were always up for a travel adventure, and Bonnie was always willing to drive.  After her retirement, she also traveled all over Minnesota with Grandma’s Babysitting Services.

Family was her #2 priority, just behind the Lord. She was so proud of the family she created and looked forward to spending time with them at local events or family camping trips and boat rides.  Never reaching five feet tall, Bonnie was small in stature, but left behind big footprints to fill.  She always said that dynamite comes in the smallest packages.

Bonnie died peacefully on Thursday, April 28, 2022, at the Swift County Benson Hospital in Benson, Minnesota, she was 88 years old.

Pedersen Funeral Home in Morris is in care of arrangements for Bonnie.

To order memorial trees or send flowers to the family in memory of Bonnie Howe, please visit our flower store.