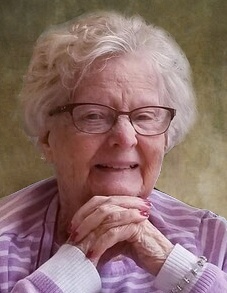 Funeral services for Verree Fox will be held on Thursday, November 4, 2021 at 10:00 a.m. at St. John’s Lutheran Church in Hancock with Reverend Mark Kahrs officiating.  A visitation will be on Wednesday from 5-7:00 p.m. at the Pedersen Funeral Home in Morris and will continue one hour prior to the services at the church on Thursday.  Burial will be at the Appleton City Cemetery in Appleton, Minnesota.

Bernice Verree Whaley was born the 8th of 9 children to George and Bernice (Huntington) Whaley on April 3, 1919, at their family’s log home in Dead Lake Township, Ottertail County, Minnesota.  At just two pounds at birth, Verree was placed in a shoebox and on a wood stove, she was a strong woman from the start of her life!  From the age of eight until she was 12, Verree was hospitalized at Gillette Children’s Hospital with Polio.  Verree was raised in Ottertail County where she attended school, graduating from the Perham High School.  She was united in marriage to Allie Bailey in 1945.  On November 25, 1952, she was united in marriage to Ezra Fox; he brought a daughter and she brought her four children into the marriage and then together, they welcomed two more, completing their blended family of seven children.  They made their home near Hancock on the Fox farm where Verree spent her days caring for their children and their home.  She moved from the Fox farm to her home in Hancock in 1977 and then moved to Skyview Plaza in Morris is 2007. In 2019, she moved into the Legacy Assisted Living where she lived until her death.

Verree very much enjoyed spending time with her friends and neighbors, they would often get together with their children for lunch, tea parties, and the occasional play put on by the children.  She was an excellent gardener, baker and cook.  Verree liked to play cards with friends and family, reading, putting puzzles together and talking.  Her favorite place was her rocking recliner where she was able to sit and watch people as they went by and was able to chat with several people.  Her family was of the upmost importance.  She prayed for her children every day and awaited their daily calls. If you would ask her, she would say she would most like to be remembered for teaching her children about God; and she succeeded to raise a faithful family.

Verree died peacefully surrounded by her family on Monday, November 1, 2021 at the Legacy Assisted Living in Morris; she had lived to 102 years old.

Pedersen Funeral Home in Morris is in care of arrangements for Verree.

To order memorial trees or send flowers to the family in memory of B. Verree Fox, please visit our flower store.