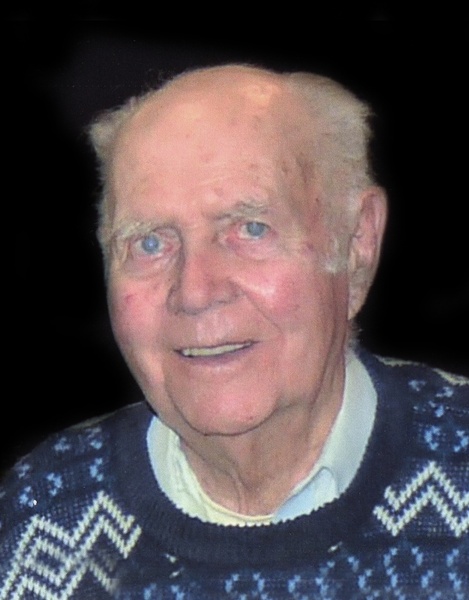 Funeral services for Clifford Bjorlin of Donnelly will be held Wednesday, July 20, 2016 at 10:30 AM at Hosanna Worship Center in Morris. Reverend Tom Fangmeier will be officiating. Visitation will be held Tuesday from 5 to 7 PM, with a prayer service at 6:30 at the Pedersen Funeral Home in Morris and for one hour prior to services at the church on Wednesday. Burial will be at Vinger Cemetery in Donnelly.

Carl Clifford "Cliff" Bjorlin was born on April 26th, 1923 on the family farm in Eldorado Township, west of Donnelly, to Carl William and Emma (Engel) Bjorlin. He was the second child of 6 and their first son. He attended the District 35 country school and then Chokio, leaving after the 8th grade to help on the farm. As a young man Cliff enjoyed dancing, hunting, fishing, and farming. A highlight of his younger years was a road trip with a couple of friends to California by way of Texas.

Church functions were also an important part of his early life. One of these church gatherings led to him meeting the "catch of his life," at Lake Geneva Bible Camp: Ruth Elizabeth Vernone "Nonie" Hendrickson. They were married on March 22nd, 1950 and enjoyed 56 years together until Nonie's passing in 2006. To this union were born two children; Robert Dale and Diane Ruth.

Cliff was a farmer. He loved farming and continued to farm and care for the land that his father and grandfather had farmed until 1984. He then continued to help others farm, even after he moved his house to Donnelly in 1996. He worked with everything from horses to steam engines to modern tractors. His hard work was tempered with fishing, hunting, the Donnelly Horseshoe League, the Donnelly Threshing Bee, church, and, most importantly, spending time with family which included spending many winters in Arizona with his son and his family. While being what many would consider a "typical" Scandinavian, his shining blue eyes and quick smile belied his sometimes stoic appearance.

Cliff's strong faith was a focal point in his life and never wavered though tested with personal trials. He was one of the founding members of the Morris Assembly of God church, now Hosanna Worship Center. He served many years on the church board. He was a man who lived by the Golden Rule. His word was his bond and he did not give it lightly. Besides the church board, Cliff also served 33 years as clerk on the Eldorado Township board replacing his father who also served 30+ years as clerk. He continued to live in his own house; cooking, cleaning, mowing lawn and doing repairs into his 90's. He moved to the Barrett Care Center in the fall of 2015.

Cliff passed away peacefully, into the arms of his loving Savior, Tuesday, July 12th, at the Steven's Community Medical Center at the age of 93. He was surrounded by family that loved him dearly.

Cliff is survived by his son Robert (and Edie) Bjorlin of Glendale, AZ, and daughter Diane (and Gary) Amundson of Barrett, MN; grandsons Weston Bjorlin of Yuma, CO, Carl Michael and Christopher Bjorlin of Phoenix, AZ, and Cody Amundson of Barrett; sisters Fern Haley Rasmussen of Alexandria, and Carolyn Smith of Donnelly; sisters-in-law Vivian Bjorlin of Chokio, Doris Bjorlin of Cottage Grove, Virginia Bjorlin of NC, Goldie Hendrickson of Minneapolis, and Eunice (Allan) Wright of CA; and many nieces and nephews. He was preceded in death by his wife Nonie, his parents and brothers Calvin, Paul, and Donald.

The family would like to thank the staff at Barrett Care Center, and Stevens Community Medical Center for the care and support they provided to Cliff and his family. To order memorial trees or send flowers to the family in memory of Carl Bjorlin, please visit our flower store.