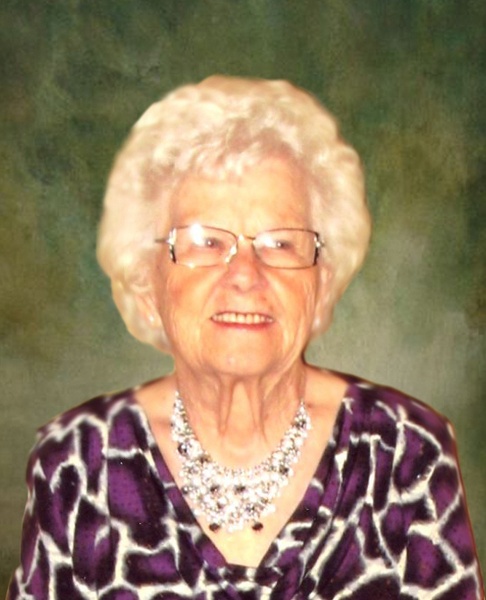 Funeral services for Carol Boettcher of Morris, MN will be Monday, June 18, 2018 at 1:00 p.m. at St. Paul’s Evangelical Lutheran Church in Morris, with Reverend Bruce Hanneman officiating. Visitation will be Sunday from 5 to 7 p.m. at the Pedersen Funeral Home in Morris and for one hour prior to services at the church on Monday. Burial will be in Summit Cemetery in Morris.

Carol Inez Anderson, daughter of Carl and Inga (Anderson) Anderson, was born October 7, 1922 in Walden Township in Pope County, Minnesota. Her family lived three miles South East of Cyrus, where Carol was baptized and confirmed at St. Petri Lutheran Church. She attended and graduated from Cyrus High School in 1941. On February 24, 1943, she was united in marriage to Arnold Boettcher in the parsonage in Hancock by Rev. Duehlmier. For several years the couple made their home on a farm North of Frog Lake, before moving to Morris, where they raised their four children. In 1967, Carol and Arnold opened “Arnie’s Farm Store”, where they both worked alongside their sons. Arnold passed away on November 14, 1976. Carol continued to live in Morris, retiring in the 1980’s. Following her retirement, she continued to do volunteer work; helping others throughout town, the clothing bank, the Senior Citizen Center, The Villa and the hospital auxiliary. On October 17, 2011, she moved to Grand Arbor in Alexandria, MN, where she continued to live until the time of her death.

Carol was a member of St. John’s Lutheran Church in Hancock, Minnesota. She was a collector of many things, too many to list; she enjoyed attending auctions, traveling and dancing. She was a kind, generous and warm person. She loved spending time with her family and friends.

Carol died on Wednesday, June 13, 2018 at Grand Arbor in Alexandria, Minnesota. She was 95 years old.

To order memorial trees or send flowers to the family in memory of Carol Boettcher, please visit our flower store.