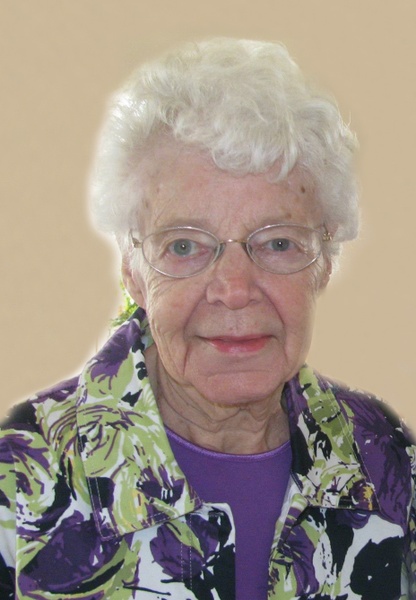 Carol Marie Osterberg was born June 20, 1932 to Gerhard and Selma (Kling) Osterberg in Watkins, Minnesota, the eldest of four children. She was baptized and confirmed at Ostmark Lutheran Church in Watkins. She graduated from Litchfield High School in 1950. Carol attended St. Cloud Teachers College and obtained her teaching degree in 1952. Her first teaching job was at Chokio elementary school, from 1952-1956, then Elbow Lake for one year, followed by Morris Elementary for the next four years. During that time, she met her future husband, Ordell Ritter. The couple was married on December 27, 1960 at St. Mary's Catholic Church in Chokio.

Carol continued to teach a few more years until she took time off to raise her family. Six daughters were born to Carol and Ordell – Sara, Rebecca, Jan, Amy, Ruth, and Maureen. For several years, Carol stayed busy with raising the girls and helping Ordell operate Ritter Trucking. During this time, Carol also continued with her education, and obtained her Early Childhood certification. She taught Head Start in Graceville, and later Clinton-Graceville, followed by ECFE in Chokio and Morris, retiring in 2002. Carol helped out at the Chokio Review for several years as a writer and proofreader. She wielded her red pen with grace, always gently correcting the writers and typists – as only an elementary teacher can do.

Carol was a member of Our Savior's Lutheran Church of Chokio and confirmation teacher for many years. She was involved in many organizations and societies throughout her life, including the Stevens County Fair Board, Chokio Study Club, Chokio Commercial Club, and was an active member of the Stevens County Historical Society and Museum where she donated many hours of research on several projects. Carol also compiled the information for the Chokio Centennial History Book in 1998. She was the number one fan of her kids and grandchildren at their many sporting, school, church and 4-H events.

Carol passed away on Monday, November 16, 2015 at Grace Home in Graceville, Minnesota. She was 83 years old.

In lieu of flowers family prefers memorials to the Stevens County Historical Society in Morris and Chokio-Alberta ECFE. To order memorial trees or send flowers to the family in memory of Carol Ritter, please visit our flower store.