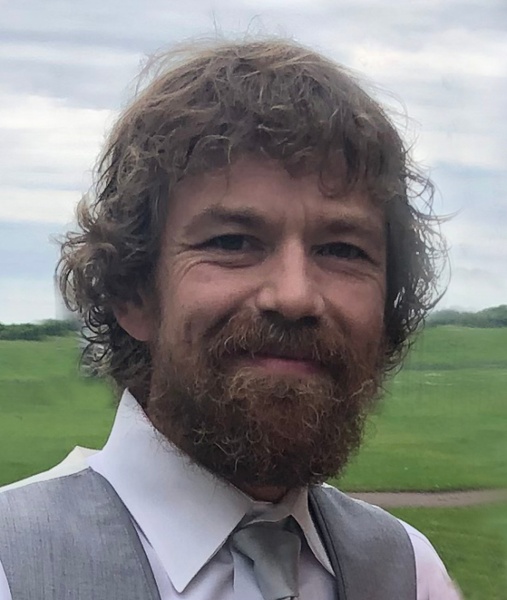 Funeral services for Casey Lesmeister of Morris, MN will be Tuesday, July 2, 2019 at 10:30 a.m. at Faith Lutheran Church in Morris, with Reverend Dell Sanderson officiating. Visitation will be Monday from 4 to 7 p.m., with a prayer service and time of sharing at 7:00 at Faith Lutheran Church in Morris and for one hour prior to services at the church on Tuesday. Burial will be in Summit Cemetery in Morris.

IN HONOR OF CASEY, THE FAMILY REQUESTS, EVERYONE WEAR JEANS AND YOUR FAVORITE (ROCK) T-SHIRT TO THE VISITATION.

Casey John Lesmeister was born on September 10, 1981, to Thomas and Roxanne (Stevenson) Lesmeister at Stevens Community Medical Center in Morris, Minnesota. He was baptized into his faith at St. John’s Lutheran Church in Donnelly and reaffirmed his faith through his confirmation at Faith Lutheran Church in Morris. Casey was raised in Morris where he received his education at Morris Area Schools, graduating with the class of 2000. Following his high school education, he attended the North Dakota State College of Science in Wahpeton. Casey was a machinist, working at the family business, Custom Fabrication, with his parents and brothers in Morris. While on a church trip to New Orleans in July of 1997, Casey met the love of his life, Danielle Miller, a girl from Browns Valley. Their eyes met and they both knew they had found “the one”. The two got to know one another and after a bonfire in August of that same year; they began dating and have been inseparable ever since. On July 6, 2002, Casey and Danielle were united in marriage at Faith Lutheran Church; their marriage was built on respect, faith and Christ’s love. He and Danielle lived in Breckenridge while Casey was in college, then in Elbow Lake while Danielle finished college. After their schooling, they made their home in Donnelly, where they started their family, welcoming four children. They remained in Donnelly for ten years until purchasing their dream home north of Morris.

Casey was a devoted member of Faith Lutheran Church. He was truly a Man of God with a heart of a servant; his faith was astounding. Casey was a proud father, he so loved his children and would do anything for them – no matter how uncomfortable it made him, he was their biggest fan. From waltzing with his daughter in front of a crowd, bringing his son to rock concerts, letting our snuggle bug steal most of the bed, or taking our youngest on snake hunts. Casey was fiercely loyal, always making Danielle feel like the most beautiful woman in the room, going anywhere and everywhere she needed; they were soul mates. Casey loved his family- his siblings were some of his closest friends and his parents meant the world to him. There was no one that didn’t call Casey a friend, but he had a way of making the close ones feel like family. From special trips, late nights around the fire, Moondance trips, and parties at the farm. His laugh was contagious. He had a smile that would light up a room and was one of the few that smiled with his eyes – so you knew it was genuine. Above all, Casey gave the very best hugs- hugs you could feel long after they stopped. Casey was extremely handy and highly intelligent – there wasn’t a project that he couldn’t accomplish – whether it was to invent or repurpose anything wood, metal, or plumbing, he could do it all! Casey was kind, selfless, humble, funny, witty, ridiculously strong and he never complained. He enjoyed hunting, fishing, camping, playing in the Summertime Swingers Men’s Softball League, moving snow in his Ranger – complete with a homemade plow, and his Harley Davidson Motorcycle. Casey also had a deep love for zebra cakes and frosted flakes. He loved life!

In 2008, Casey was diagnosed with Leukemia and in February of 2018, he was diagnosed a second time with Leukemia. On June 28, 2018, Casey received a Bone Marrow Transplant, from his mother, Roxanne. Casey fought with strength and a deep faith. He had fought the cancer and beat it twice.

Casey died unexpectedly on Wednesday, June 26, 2019 at the University of Minnesota Medical Center in Minneapolis. He was 37 years old.

Pedersen Funeral Home in Morris is in charge of arrangements for Casey. To send an on-line condolence to the family, visit our website www.pedersenfh.com.

To order memorial trees or send flowers to the family in memory of Casey Lesmeister, please visit our flower store.