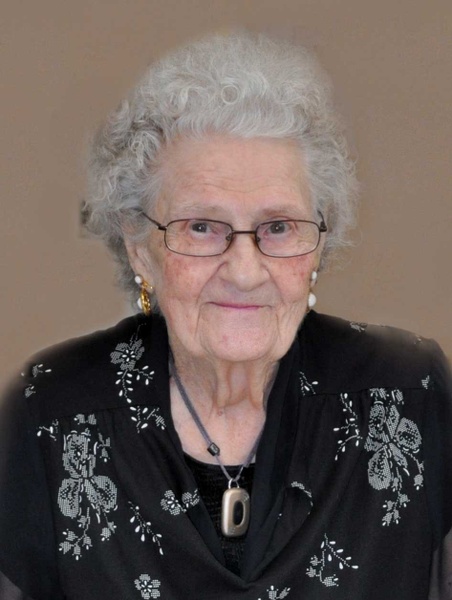 Funeral services for Catherine Kellen of Morris, MN will be held Friday, January 8, 2016 at 10:30 a.m. at Assumption Catholic Church in Morris, with Father Todd Schneider officiating. Visitation will be held Thursday from 5 to 7 p.m., with a prayer service at 6:30 p.m., with a rosary to follow at the Pedersen Funeral Home in Morris, and for one hour prior to services at the church on Friday. Burial will be in Calvary Cemetery in Morris.

Catherine Emma Ring, daughter of Cornelius and Lena (Schellenberger) Ring, was born March 20, 1922 in Stevens County, Minnesota. She grew up near Morris and attended rural school. Following her schooling, she worked various jobs in the Morris area. On July 19, 1943 she was united in marriage to Alphonse Kellen in Morris. The couple made their home in Morris. Catherine worked at several restaurants in the Morris area until 1989, at which time she began working as a volunteer at the Morris Senior Nutrition Center. She retired in 2001. Since that time Catherine kept busy enjoying life and spending time with her family and friends. She most recently was a resident at West Wind Village in Morris where she continued to live until the time of her passing.

Catherine was a member of Assumption Catholic Church in Morris, the American Legion and VFW auxiliaries, and a charter member of the Eagles Auxiliary. Some of her hobbies were fishing, watching stock car races, going for rides in the country, watching TV, cooking, baking and bird watching.

Catherine died Saturday January 2, 2016 at the Stevens Community Medical Center in Morris at the age of 93.

To order memorial trees or send flowers to the family in memory of Catherine Kellen, please visit our flower store.