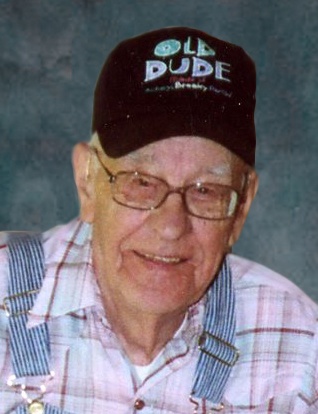 Funeral services for Clarence Giese, 98 of Donnelly, MN will be on Tuesday, January 1, 2019 at 11:00 a.m. at St. John's Lutheran Church in Donnelly with Reverend Michael Nelson officiating.  Visitation will be on Monday, December 31, 2018 from 2-5 p.m. with a prayer service and time of sharing at 4:00 p.m.,  at the Pedersen Funeral Home in Morris and will continue one hour prior to the services on Tuesday at the church.  Burial will be at Emmanuel Lutheran - Swan Lake Cemetery, rural Morris.

Clarence died on Wednesday, December 26, 2018 at the Stevens Community Medical Center in Morris.

Every special event needs that one special song, that one special dance, that gets everyone up on their feet and onto the dance floor together. To the Giese family, Clarence Emil Giese, was that special song, and he definitely knew how to dance! His first dance began October 10th, 1920; born to Herman and Jurda (Helberg) Giese in Grant County, Minnesota. He attended District 33 School through the 8th grade, which he bragged about! Clarence was confirmed in 1935 at Emmanuel Lutheran Church in Swan Lake Township. As a young child, the musical notes continued to hit the page as his love and passion for animals began to shine through. He kept ferrets, skunks (not de-scented skunks, as he would have you know) and other wild animals. He later took taxidermy courses by correspondence from Omaha, and he earned his taxidermy diploma in 1948. Though later in life, he would never kill an animal, and all deer were “Bambi”.

Clarence was an avid dancer to old time music such as polkas and waltzes. His steps and stanzas grew when he started working on the family farm. Clarence married Vivian Harstad on October 1st, 1950. Their song rose into a chorus as they were blessed with four children together; Rodney, Sharon, Rebecca, and Lori. Sadly, Vivian passed away in 1967 at the young age of 36. Clarence continued to farm for many years until 1983.  While he was still crop farming, he started The Oakridge Game Farm. His animal game farm started with two fawns and expanded to include 15 different kinds of pheasants, six types of foxes, deer, coyotes, timberwolves, bobcats, llamas, buffalo, black bears, and even a lion. Clarence’s black bears were popular attractions both at the farm and at the Stevens County Fair. His lyrics continued on the game farm for 20 years until 1993. He concurrently began doing woodworking and craft shows with his daughter, Sharon, across the Midwest. Clarence could always tell you how many birdhouses or routered signs he had made that year. There were many visits by his grandkids to “grandpa’s shop” helping with the latest project. The kids could always find a grape pop or candy piece in the shop too!

As his dance continued, Clarence met Lorraine Anderson Bakken through church and local dances. Clarence and Lorraine were joined in marriage on October 29th, 1994, and he moved from the farm into Donnelly. Clarence kept working in the shop creating many different types of crafts, and he also began making his tractors (red tractors, of course!), planes, and piggy banks. He retired from the Rendsville Township Board in 1996, after 37 years of service. He served on the Stevens County Fair board for many years as well.  Unfortunately, Lorraine suddenly passed away in 2007. They enjoyed being dance partners for 12 years.

The family grew to include many great grandchildren and recently even a great-great grandson. Clarence continued his hobby of making various old-time tractors and threshers out at the shop on the farm (his favorite place to be). His other favorite pastimes included playing whist and shaking dice to win 6-5-4. He pressed on to the next verse, shoulders still bouncing whenever he heard a good beat.  Clarence’s favorite dance numbers included, “Sugartime”, “Wabash Cannonball”, “Achy Breaky Heart”, and the “Tennessee Waltz”. His sense of humor and joking nature always kept him young at heart. He was together with his special friend, Agnes Kruize, in Morris for the last ten years. Clarence’s last dance was to heaven on December 26th, 2018, at the age of 98, surrounded by his family. Clarence’s song and dance were the foundation of the Giese family, and his melody will continue to play on in the hearts of his family and all those who knew him.

Pedersen Funeral Home in Morris is in charge of arrangements for Clarence.

To order memorial trees or send flowers to the family in memory of Clarence Giese, please visit our flower store.