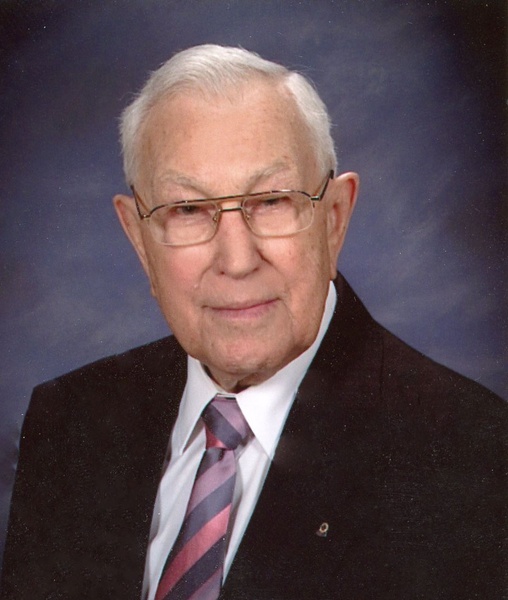 Memorial services for Clarence "Kett" Ketterling of Morris, MN will be Tuesday, December 15, 2015 at 2:00 p.m. at Federated Church in Morris, with Reverend Lauren Snell officiating. Visitation will be Monday from 5 to 7 p.m. at the Pedersen Funeral Home in Morris and for one hour prior to services at the church on Tuesday. Burial will be in Summit Cemetery in Morris. Military rites will be provided by the Morris American Legion, V.F.W. and AmVets.

Clarence F. Ketterling was born on April 9, 1918 in rural Miles City, Montana to Fred and Maria (Buck) Ketterling. He was the first child of 13. In his first years of life they moved back to his parent's rural home area of Streeter/Napoleon, North Dakota. He grew up helping his father and family farm the land with teams of horses. He attended the rural Ketterling School with his siblings through the 8th grade. For high school he and a sister boarded in Streeter, ND where he graduated from high school in 1938. Kett met the love of his life, Ruth J. Enzminger, in Streeter, ND and they were married in April of 1942 while he attended Ellendale Normal and Industrial College, majoring in Industrial Arts and Ruth taught school.

After graduation, he entered the military in the Army Air Corps and was stationed in Springfield, Massachusetts. His military career was stateside as a Tech Sergeant who processed payroll and staff records. His typing abilities were to be envied. He was on a troop train to be shipped overseas when the war ended in 1945. He was assigned to interview and discharge soldiers after the war. Talking with them is how Kett found his chosen profession of dentistry.

Clarence graduated from University of Minnesota Dental School in 1950 and assisted in construction of the Williams Arena.

Clarence and Ruth had three children, Warren, Janell and Colleen. Ruth passed away after 15 years of marriage. In 1958, Clarence married Irma R. Olson and in 1961 the family moved to Morris, Minnesota, where Kett joined the dental practice of Jorgenson, Dunnum and Ketterling.

Kett was very active in Federated Church of Morris and attended many Methodist conference conventions as a delegate. He was very active in the Lions Club locally and served as the District Governor from 1983-1984. They attended many national and international conventions and enjoyed traveling. He was also active in the American Legion, State Dental Association, Retired Senior Volunteer Program and enjoyed many hours working out at the Regional Fitness Center until he was 95. He and Irma also traveled to Madagascar and Nigeria to do mission dentistry and to Alaska to build a church. His kind and gentle spirit will be missed by all he encountered, especially his family.

Clarence passed from this life on Tuesday, December 8, 2015 of natural causes at the Barrett Care Center in Barrett, MN at the age of 97 years and 8 months.

In lieu of flowers the family prefers memorials to Federated Church, Stevens County Historical Society and MAHS Dollars for Scholars. To order memorial trees or send flowers to the family in memory of Clarence Ketterling, please visit our flower store.