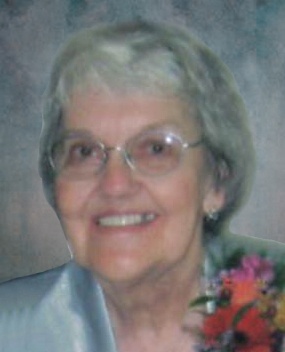 Funeral services for Darlene Bertram of Herman, recently of Morris, will be held Tuesday, March 29, 2022 at 11:00 a.m. at Eden Reformed Church in Herman, with Reverend Harrison Newhouse officiating. Visitation will be Monday, March 28 from 5 to 7 p.m. at the Eden Reformed Church in Herman and for one hour prior to services at the church. Burial will be in Lakeside Cemetery in Herman.

Darlene Lillian Struck was born on August 12, 1930 in Morris, Minnesota to Fred and Lillie (Mau) Struck.  She was raised in Rendsville Township, Stevens County, Minnesota.  Darlene was baptized and confirmed at Emmanuel Lutheran Church – Swan Lake Township and received her education at country school through the 8th grade and then Morris High School, graduating with the class of 1948.  Following high school, she moved to Minneapolis to attend business college; after one year, she moved back home to help on the farm.  While roller skating at the Perkins Lake hangout spot, Darlene met Leslie Bertram, the two began dating and were married at Emmanuel Lutheran Church on July 21, 1951.  They made their home ½ mile from Darlene’s homeplace to her Uncle Ben’s farmsite, farmed and started their family.  In 1961, they moved to Herman, one mile from Leslie’s homeplace, and continued farming.  In 1977, they purchased a gas station in Herman, D & L Service.  In the mid 80’s, Darlene started work outside of the home, running the Browse About gift shop in the back of the gas station.  She worked there until D & L needed a new bookkeeper, at which time she started working alongside Les, running the station.  In 2011, Leslie and Darlene moved into Herman.  When Les passed away in January of 2014, she took over running the station with her granddaughter, Lisa. Later that year, Darlene suffered a stroke and moved into Skyview Assisted Living in Morris. In 2020, when she needed more care, she became a resident of West Wind Village where she lived until the time of her death.

Darlene was a member of Eden Reformed Church in Herman active in various church activities. This included being a Sunday school teacher and superintendent, ladies aide, and spent many years serving as the piano and organist.  Darlene was a gifted musician, being able to read music and playing instruments by ear, especially her accordion.  She spent many overtime hours being a homemaker, tending to her large vegetable and flower gardens. Assisting with the farm work was also a major part of the day during harvest. This included running combine for wheat harvest, her day ending by getting into the kitchen to make supper, hopefully before midnight! Darlene was also a member of the Stevens County Homemakers group, Country Bells, for many years.

IN LIEU OF FLOWERS, MEMORIALS TO THE FAMILY ARE PREFERRED FOR DONATION TO DARLENE'S FAVORITE CHARITIES IN HER HONOR.

Pedersen Funeral Home in Morris is in care of the arrangements for Darlene.

To order memorial trees or send flowers to the family in memory of Darlene Bertram, please visit our flower store.