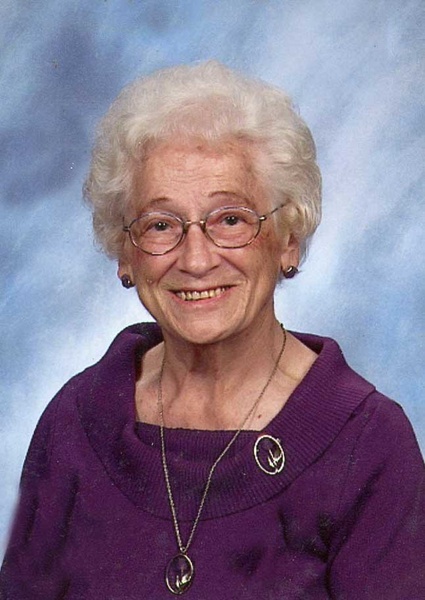 The funeral for Darline J. Wente, of Morris, Minnesota will be held on Thursday, May 12, 2016 at 2:00 p.m. at the Faith Lutheran Church in Morris, with Reverend Dell Sanderson officiating. Visitation will be on Thursday one hour prior to the service at the church. Burial will be at the Summit Cemetery, Morris.

Darline Smith, daughter of Frank and Sophie (Ryberg) Smith was born on July 14, 1925 in Rendsville Township near Morris, Minnesota. She attended country school at District #39 and a year at Morris High School. After her schooling, Darline worked for ladies in the neighborhood and Skogmo Store in Hoffman. Darline was united in marriage to Luverne C. Wente on June 24, 1942 at Peace Lutheran Church in Morris. The couple purchased a farm in Rendsville Township and began farming. Darline also worked several years at the Wedding Station in Morris, where she did altering, sewing and making wedding veils. Luverne died on June 18, 1995. Darline continued to live on the farm for several years before moving into Morris. She later became a resident at the West Wind Village in Morris, where she lived until the time of her death.

Darline was a member of Faith Lutheran Church and was active in the women's circle. She enjoyed gardening, canning, and loved playing cards. Darline was a superb cook; she could make something out of nothing and always had enough food for all who showed up for dinner. She will be remembered for her quick wit, her honesty, and being fun, however, her deep love of her family is what she will be remembered for most.

Darline died on Monday, May 09, 2016 at the Stevens Community Medical Center in Morris. She was 90 years old.

Darline Wente
To order memorial trees or send flowers to the family in memory of Darline Wente, please visit our flower store.