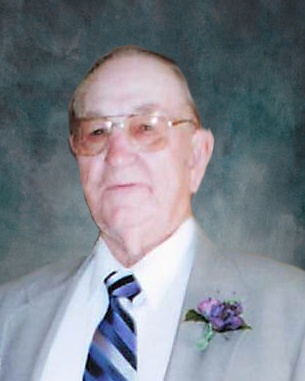 Funeral services for Darrell Heuer of Chokio, Minnesota, will be held on Tuesday, August 31, 2021 at 1:00 p.m. at Our Savior's Lutheran Church in Chokio with Reverend Erik Rundquist officiating.  Visitation will be one hour prior to the service.  Burial will be at Chokio Lutheran Cemetery, rural Chokio.

Our Savior’s Lutheran Church asks everyone in attendance to wear a mask at the service.

Darrell Charles Heuer, son of Elmer and Dora (Kussatz) Heuer, was born June 28, 1933 in Morris, Minnesota.  He was baptized April 22, 1956 and later confirmed at St. Paul’s Evangelical Lutheran Church by Reverend H.C. Duehlmeier.  He grew up and attended country school.  Darrell Joined the National Guard, and during this time was called to active duty during the Korean War and served as Military Police in Japan.  He was honorably discharged from the Army as a Corporal on August 28, 1952.  Darrell met his future wife Marion in 1954 at the Morris Armory while roller-skating.  On September 21, 1957, he was united in marriage to Marion Elizabeth Hoppe at Zion Lutheran Church, Horton Township, rural Hancock, Minnesota by Reverend Carl Wirth.  They were blessed with two children, Timothy Todd and Renae Beth.  When Darrell and Marion were first married, Darrell worked two weeks out of every month for Otter Tail Power Company until the electrical business grew to full time.  They operated Heuer’s Electric Service from 1956 until the spring of 1985 when Darrell and Marion sold their business to Royal Steuck.  Darrell later drove school bus for sporting events.  The couple lived in Chokio, Minnesota from September 21, 1957 until August of 2020 when they moved to Nelson Gables in Alexandria, Minnesota.  Darrell continued to live in Alexandria until the time of his passing.

Darrell was a very active member of Our Savior’s Lutheran Church and also served as a volunteer fireman for the city of Chokio for 37 years.  In his early days, he enjoyed racing, watching NASCAR and hunting moose.  He loved walleye fishing and had his boat set up exactly the way he wanted to be able to load his boat all by himself.  He will be dearly missed by his loving family.

Darrell passed away Monday, August 23, 2021, surrounded by his family, at Nelson Gables in Alexandria, Minnesota.  He was 88 years old.

Pedersen Funeral Home in Morris is in charge of the arrangements for Darrell.

To order memorial trees or send flowers to the family in memory of Darrell Heuer, please visit our flower store.