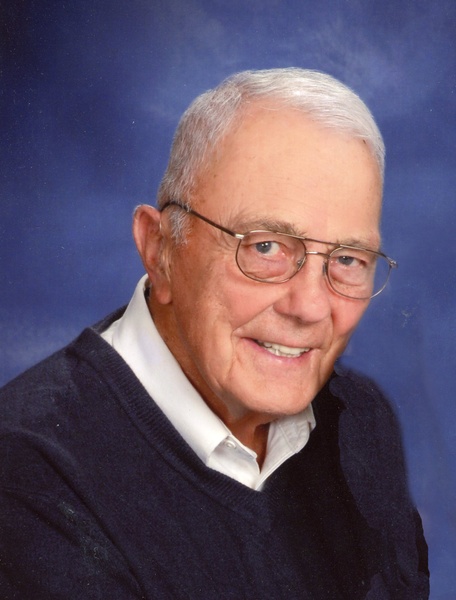 The funeral for Donald Gandrud, of Glenwood, Minnesota will be held on Thursday, August 11, 2016 at 11:00 a.m. at the Fron Lutheran Church in Starbuck, Minnesota, with Reverend Paul Johnson officiating. Visitation will be on Wednesday at the Starbuck Funeral Home from 5 to 7 p.m. and Thursday, one hour prior to services at the church. Burial will be at the Fron Lutheran Cemetery at a later date.

Donald Gilman Gandrud, son of Gilman and Elsie (Eckman) Gandrud was born on January 10, 1931 in Glenwood, Minnesota, where he grew up and attended school. Graduating from Glenwood High School in 1948, Don entered Luther College in Decorah, Iowa. While in college, he enlisted into the U.S. Airforce and served his country during the Korean War. After being honorably discharged in November of 1954; Don returned to college, where he was on the Luther Men's Golf Team. He graduated in 1956 from Luther College, with a bachelor's degree in business. During college, Don met Colleen Smedstad and in June of 1957 the couple was united in marriage at the Fron Lutheran Church in Starbuck. They made their home in the Minneapolis area over the next 33 ½ years, where Don worked for Land O' Lakes as a regional manager. After retiring in 1990, the couple built a lake home on Lake Minnewaska near Starbuck and in 2003, moved to a home south and west of Glenwood. Don and Colleen enjoyed spending 12 winters in New Braunfels, Texas and 12 winters in Sun City, Arizona.

Don loved to golf, fish, and hunt. Being a golfer for 75 years, he had many opportunities to teach someone how to improve their swing including his family. Fishing on Minnewaska was a favorite, as he also enjoyed several trips to Canada and even a trip to Devils Lake, North Dakota this past summer. In the fall you could find him out with his son and other avid hunters searching for birds and deer. Before moving to the Minnewaska area Don was a very active member at Christ the King serving as the financial secretary. Don was a member of the Fron Lutheran Church, the Minnewaska Golf Club, and Starbuck Lions and helped start the Minnewaska Lake Association, where he served on the board for many years.

Don worked with youth sports for several years as his kids were growing up. You could often find him watching or reading about high school, college and professional sports. He was an avid Timberwolves, Vikings, Twins and Gopher fan. Don was a great cook and was best known for his vegetable soup. Don will be remembered for his love of people, kind heart, and finding the good in all; however, he will be mostly remembered for the love of his family.

Don died peacefully in his sleep on Friday, August 5, 2016 at his home near Glenwood. He was 85 years old.

Starbuck Funeral Home in Starbuck is in charge of the funeral arrangements. An online guest book can be signed at www.starbuckfh.com. To order memorial trees or send flowers to the family in memory of Donald Gandrud, please visit our flower store.