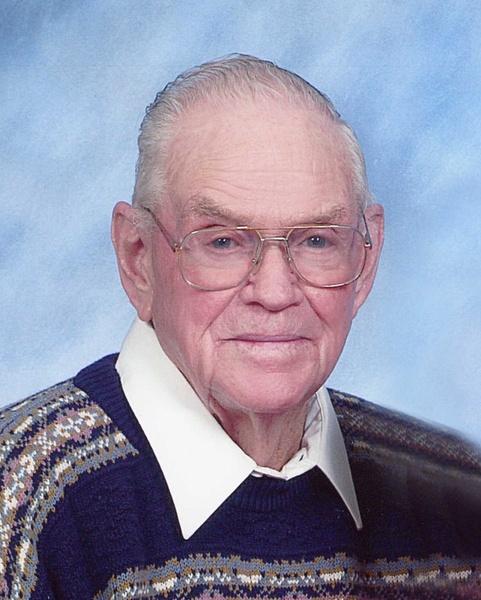 The funeral mass for Donald Grossman of Morris, MN will be held Monday, January 25, 2016 at 10:30 a.m. at Assumption Catholic Church in Morris, MN. Celebrant for the mass will be Father Todd Schneider. Visitation will be Sunday from 4 to 6 p.m., with a prayer service at 6:00 at the Pedersen Funeral Home in Morris and one hour prior to services at the church on Monday. Burial will be in St. Mary's Catholic Cemetery in Chokio, MN. Military rites will be provided by the Morris American Legion, V.F.W. and AmVets.

Donald Peter Grossman, son of John and Cecelia (Foley) Grossman, was born July 7, 1921 in Chokio, Minnesota, where he grew up and attended country school. Following his schooling, Don helped his dad on the farm. Don enlisted in the United States Navy in 1939. He was honorably discharged in 1943 and moved back to Chokio to help on the family farm. Don was united in marriage to Shirley Pashan on June 8, 1948. The couple made their home on a farm south of Chokio, where Don farmed and drove school bus until 1969, when they moved to Morris. He then started working at the University of Minnesota, Morris in the maintenance department and continued to drive bus for the Morris Area School District until retiring in 1994. During his spare time, Don would coach baseball. He coached for over 26 years for several organizations including little league and American Legion baseball.

He was a member of Assumption Catholic Church, the American Legion and the V.F.W. He enjoyed coaching and watching baseball, mowing the lawn, and going fishing as often as he could with his son, Rick at Nancy's cabin on Battle Lake.

IN LIEU OF FLOWERS THE FAMILY PREFERS MEMORIALS TO THE AMERICAN LEGION BASEBALL. To order memorial trees or send flowers to the family in memory of Donald Grossman, please visit our flower store.