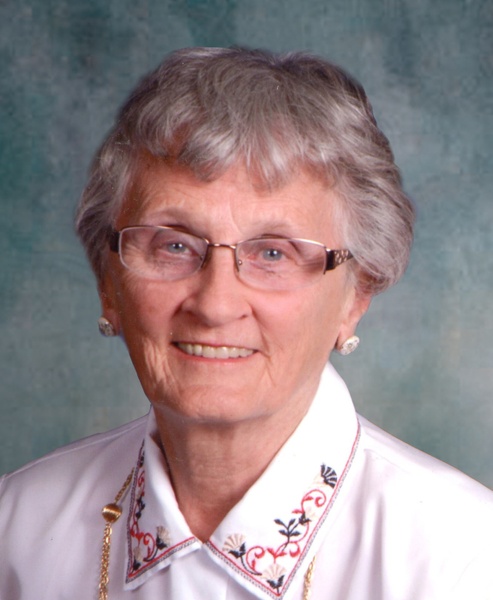 Funeral services for Doreen Wade of Starbuck, Minnesota, formerly of Chokio, Minnesota, will be held on Monday, February 26, 2018 at 11:00 a.m. at Sacred Heart Catholic Church in Glenwood, Minnesota.  Celebrant for the service will be Father Joe Vandeberg.  Visitation will be held Sunday from 3 to 5 p.m. with a prayer service at 4:30 and Rosary service to follow at the Starbuck Funeral Home in Starbuck and for one hour prior to services at the church on Monday.  Burial will be in St. Mary’s Catholic Cemetery in Chokio, Minnesota.

Doreen Beverly Cloutier, daughter of Alfred and Erna (Hovland) Cloutier, was born on February 4, 1934 in Thief River Falls, Minnesota, where she grew up and attended school.  Doreen attended Catholic boarding school for two years in Coeur d’Alene, Idaho while her father was in the Navy and her mother worked in the defense plant.  Later, their family moved to Morris, Minnesota, where Doreen went to St. Mary’s Catholic School through the 8th grade and later graduated from Morris High School on May 29, 1952.  Following her schooling, Doreen worked at Morris State Bank as a teller.  In 1954, she attended Miller Hospital School of Practical Nursing, graduating on September 16, 1956 with an LPN degree.  Doreen began working at the Stevens County Hospital in the nursery.  On June 8, 1957, she was united in marriage to Robert Wade at Assumption Catholic Church in Morris.  The couple made their home on a farm south of Chokio in March of 1958, where they raised their seven children.  Later, Doreen went back to work at the Good Samaritan Home in Clinton and West Wind Village in Morris.  She was also a hospice nurse during this time.  In 1989, Doreen and Robert moved from their farm to Chokio until October of 2000, when they moved to their lake home on Lake Minnewaska. They also enjoyed 11 years wintering in Winter Haven, Florida.  Doreen later became a resident of the Minnewaska Lutheran Home in Starbuck, Minnesota, where she continued to live until the time of her death.

Doreen was a member of St. Mary’s and Sacred Heart Catholic Church Christian Women, St. Mary’s Guild and craft ladies and was also a CCD director for 21 years. She was a member of the Chokio American Legion Women’s Auxiliary, Wednesday morning bowling, Graceville Ladies’ Golf, the Forget-Me-Not Homemakers Club and the Sundown Saddle Club.  She had a love for all animals, especially her horses and dogs.  She enjoyed sewing, hardanger, macramé, dancing and playing cards.  Her favorite card games were Cribbage and May-I.  Doreen was an only child growing up and feared being alone; she knew that she wanted to have a large family so she would always be surrounded by loving family and friends.

Doreen died on Thursday, February 22, 2018 at the Minnewaska Lutheran Home in Starbuck, Minnesota.  She was 84 years old.

In lieu of flowers the family prefers memorials to Rice Memorial Hospice, Glacial Ridge Hospice and the American Diabetes Association.  Starbuck Funeral Home in Starbuck is in charge of the arrangements.  To send condolences to the family please visit www.starbuckfh.com.

To order memorial trees or send flowers to the family in memory of Doreen Wade, please visit our flower store.