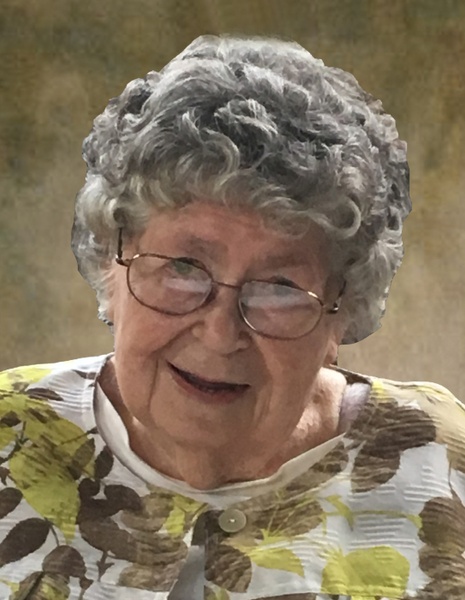 Funeral services for Doris Garoutte of Chokio, MN will be held Friday, May 4, 2018 at 11:00 a.m. at Our Savior’s Lutheran Church in Chokio, Minnesota, with Reverend Gloria Anderson officiating. Visitation will be one hour prior to services at the church on Friday. Burial will be in Chokio Lutheran Cemetery in Chokio.

Doris Jean Flaharty, daughter of Paul and Ruth (Lown) Flaharty, was born September 24, 1923 in Charleston, Illinois. She began her schooling at Lake Township Consolidated High School in Dickens, Iowa, graduating in 1941. On June 6, 1943, she was united in marriage to Keith Garoutte in Clay County, Iowa. To this union, five children were born. Following their marriage, the couple made their home in Langdon, Iowa, where they farmed until 1956, when they moved to Chokio, Minnesota. They continued to farm and raise their children. Keith died on June 22, 1995.  Doris remained on the farm until she moved into an apartment in Chokio and then later to West Wind Village in Morris.

Doris spent her life working beside her husband, Keith, on the farm – She kept the family, farm and life moving! She was always willing to step up to help when needed and she wasn’t afraid to speak her mind.  Doris was a marvelous baker, she enjoyed crafts and sewing.  She was a card shark and loved a good game of bingo, playing three cards a game up until just three weeks ago!  Doris was the host and ran the Chokio Senior Center and was also a member of the Baker’s and Homemaker’s Club and the Women’s Society of Methodist Church.   Most importantly, Doris cherished the time she was able to spend with her family.

Doris died on Tuesday, May 1, 2018 at the Stevens Community Medical Center in Morris, MN. She was 94 years old.

In lieu of flowers, memorials are preferred to the Chokio Senior Center.

To order memorial trees or send flowers to the family in memory of Doris Garoutte, please visit our flower store.