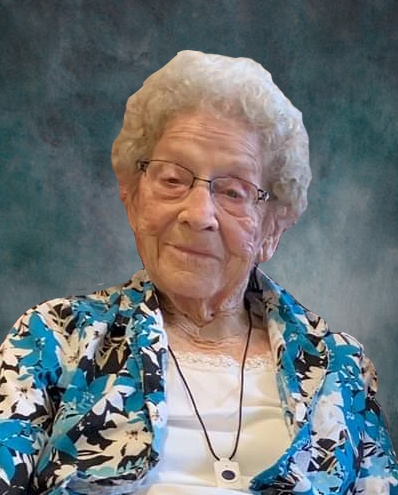 Memorial services for Doris Lagred of Starbuck, formerly of Swift Falls area, Minnesota, will be held Thursday March 5, 2020 at 1:30 p.m. at Scandia Lutheran Church, rural Glenwood, Minnesota, with Reverend Ronald Knutson officiating. Visitation will be held Wednesday from 5 to 7 p.m. at the Starbuck Funeral Home in Starbuck and for one hour prior to the service at the church on Thursday.  Burial will be in the church cemetery.

From Doris in her own words.

In 1946, Arnold was discharged from the Army and in 1947 they purchased their farm in Rolling Forks township. Doris continued living on the farm until she moved to Holly Ridge Manor in Starbuck, MN in 2010. Where she enjoyed interacting with the staff and many friends.

Doris enjoyed being outdoors and especially enjoyed her garden on the farm and her flowers. She enjoyed having her grandchildren stay with her, and playing ball with them. She enjoyed playing whist and she and Arnold enjoyed dancing for many years.

Her family would also like it noted, that she took pride in her lefse and almost always had fresh lefse on hand from September to April. When Arnold and her were actively farming she enjoyed spring calving the most. She was a hardworking, and loving mother and grandmother, who always had time for a cup of coffee, and a slice of apple or pumpkin pie.

Doris passed away peacefully, surrounded by her family, on Friday, February 28, 2020 at Holly Ridge in Starbuck, Minnesota.  She was 97 years old.

To order memorial trees or send flowers to the family in memory of Doris Lagred, please visit our flower store.