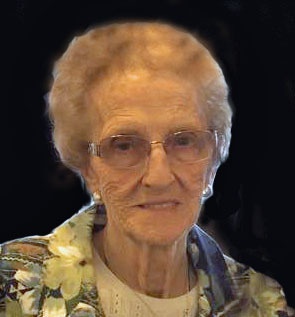 Funeral services for Dorothy Erdman of Morris will be held Saturday, January 21, 2017 at 10:00 a.m. at Our Redeemer's Lutheran Church in Hancock, with Reverend Julius Miller officiating. Visitation will be Friday from 5 to 7 p.m. at the Pedersen Funeral Home in Morris and for one hour prior to services at the church on Saturday. Burial will be in Summit Cemetery in Morris.

Dorothy Emily Johanna Mesenbrink, daughter of Edward and Meta (Fels) Mesenbrink, was born May 10, 1925 on a farm in Horton Township, Minnesota. She grew up and attended country school and later West Central School of Agriculture. She was united in marriage to Marvin Erdman on November 5, 1941 at Zion Lutheran Church in Horton Township. The couple farmed at various farms in the rural Holloway area. In 1982, Dorothy and Marvin moved to Hancock, Minnesota. Marvin died March 12, 1992. Following Marvin's death, Dorothy continued to live in Hancock until 1997, when she moved to Morris, where she continued to live until the time of her death.

Dorothy was a member of Our Redeemer's Lutheran Church, Ladies Aide, and the Morris American Legion Auxiliary. She enjoyed dancing, reading, gardening, crocheting, and playing the piano, accordion and guitar all by ear, never using music. Most of all Dorothy enjoyed spending time with her family and friends.

Dorothy died Saturday, January 14, 2017 at the Stevens Community Medical Center in Morris, having lived to reach the age of 91 years.

To order memorial trees or send flowers to the family in memory of Dorothy Erdman, please visit our flower store.