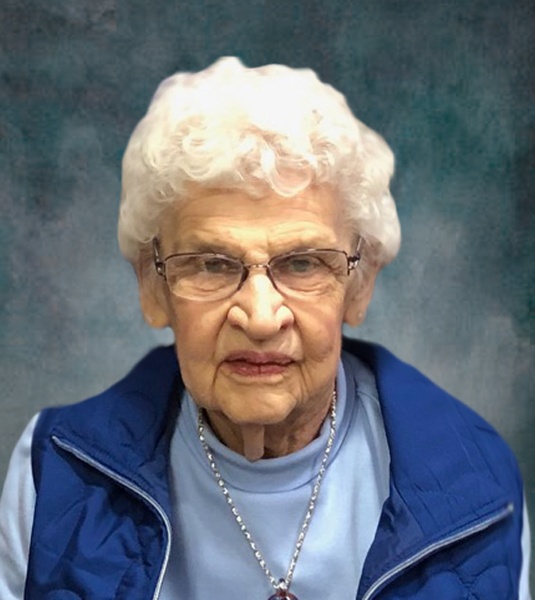 Funeral Services for Dorothy Farwell of Morris will be held Friday April 22nd at 2:00 p.m. at Faith Lutheran Church in Morris, with Pastor Vicki Toutges officiating. Visitation will take place one hour prior to services at the church on Friday. Burial will take place at Summit Cemetery in Morris.

Dorothy Geneva Anderson was born on November 2, 1929 to Joseph and Anna (Hoium) Anderson in Cyrus, Minnesota. She was baptized and confirmed at Cyrus Lutheran Church and attended her schooling years at Cyrus Public School until graduating the 12th grade in 1948. Shortly after graduation, Dorothy married Willis Wells on September 9, 1947 and lived on a farm near Hancock. In 1951 the couple moved to Morris where they would be blessed with three daughters. During her time away from home, Dorothy enjoyed working as a nursing assistant at the St. Francis Nursing Home. She worked as a nursing assistant for 26 years before retiring, and later returning to the field post-retirement as a home health aide.

During her life, Dorothy was a member of Faith Lutheran Church and a life member of the VFW Auxiliary and American Legion. She enjoyed fishing going to dances with her husband Frank, watching the Minnesota Twins, and loved hosting holidays and cooking. She especially enjoyed having lunches and talking on the phone with her friends and family. Dorothy always remembered her family on their birthday and would make sure to send a card.

Pedersen Funeral Home in Morris is in charge of the arrangements for Dorothy.

To order memorial trees or send flowers to the family in memory of Dorothy Farwell, please visit our flower store.