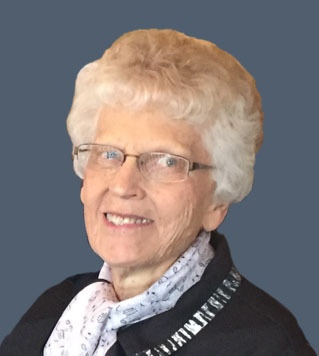 Funeral services for Dorothy Jordheim of Donnelly, MN will be Saturday, February 18, 2017 at 1:00 p.m. at St. John's Lutheran Church in Donnelly, with Reverend Michael Nelson officiating. Visitation will be one hour prior to services at the church on Saturday.

Dorothy Mae Frank was born on April 27, 1936 in Graceville, Minnesota, the daughter of Arthur and Ruth (Oberg) Frank. She was baptized on August 28, 1936 at First Lutheran Church in Morris, and confirmed on September 17, 1950 at St. John's Lutheran in Donnelly. She grew up and attended grade school in Donnelly and graduated from Morris High School in 1954. After high school, she attended and graduated from the Charles T. School of Nursing in St. Paul and was then employed there for 12 years. Dorothy was united in marriage to Philip Hougard on April 6, 1968 at Gustavus Adolphus Church in St. Paul. Following their marriage, they made their home in Strandquist, Minnesota. Philip passed away on September 12, 1969. Following his death, Dorothy moved back to Donnelly to be closer to her mother and other family members. In November of 1969, Dorothy gave birth to their daughter, Gayle. She began working at the Villa of St. Francis in Morris. Dorothy was united in marriage to Selmer Jordheim on September 27, 1986 at St. John's Lutheran Church in Donnelly. Following her retirement from the Villa, Dorothy started working with Home Health Care into her 60's.

Dorothy was an active member of St. John's Lutheran Church in Donnelly where she taught Sunday school, was in choir and active in WELCA. She was also a member of the Donnelly Homemaker's Club and the Birthday Club. Dorothy and Sam enjoyed traveling – they made three trips to Hawaii, several trips to Florida, Texas, Arizona and Kansas and also took a cruise on the SS Norway. They enjoyed their suppers together watching Wheel of Fortune. Dorothy loved gardening – flowers and vegetables, garage sales and shopping. Dorothy was a great baker – her chocolate peanut clusters being a favorite as well as her homemade buns. She loved everything beautiful: flowers, the sunset and sunrise. She had such a joy in her heart for her family and everyone she had contact with; Jenna and Owen were the joy of her life.

Dorothy died peacefully, surrounded by her family on Tuesday, February 14, 2017 at the St. Cloud Hospital in St. Cloud, Minnesota, at the age of 80. To order memorial trees or send flowers to the family in memory of Dorothy Jordheim, please visit our flower store.