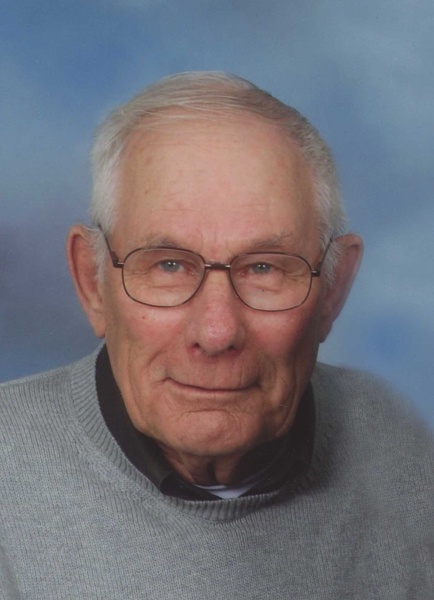 Memorial services for Duane Touhey of Norcross, Minnesota will be held Tuesday, June 7, 2016 at 11:00 a.m. at St. Charles Catholic Church in Herman. Celebrant for the services is Father Mike Kellogg. Visitation will be Monday from 5 to 7 p.m., with a prayer service at 6:30 at St. Charles Catholic Church in Herman and for one hour prior to services at the church on Tuesday. Burial will be in the church cemetery.

Duane Robert Touhey, son of William and Elsie (Haberman)Touhey was born August 4, 1927 in Slayton, Minnesota. He grew up on the family farm near Westbrook, Minnesota, where he also attended country school. He later attended Westbrook High School. Following his schooling, Duane began farming with his family. On November 8, 1949 he was united in marriage to Veronica Schwab at St. Gabriel's Catholic Church in Fulda, Minnesota. The couple moved to the Norcross area in 1950, where they raised their children and Duane continued to farm. He retired in 2002 and has remained on the farm until the time of his death.

Duane was a member of St. Charles Catholic Church in Herman. He enjoyed snowmobiling, camping, hunting, having coffee in town and riding in his pickup. He especially enjoyed spending time with his family and friends.

Duane died on Sunday, May 29, 2016 at Lake Region Hospital in Fergus Falls, Minnesota. He lived to 88 years.

He is survived by his wife of 66 years, Veronica "Vonnie" Touhey of Norcross; six children: Terrie (Everett) Eidal of Wendell, Bob (Deb) Touhey of Chaska, Mike (Doreen) Touhey of Benson, Cindy (Mike) Stroozas of Hudson, WI, Larry Touhey of Norcross and Pam (Scott) Moore of Radnor, OH; close friend: Doug Ninneman of Bismarck, ND; one sister: Nadine Touhey of Mankato; two sisters-in-law: Gayleen Touhey of McGregor and Carol Touhey of St. James; eight grandchildren; 13 great-grandchildren and many nieces, nephews and cousins. He was preceded in death by his parents; one sister and brother-in-law: Pat (Vern) Konold and two brothers: Bernard and James Touhey. To order memorial trees or send flowers to the family in memory of Duane Touhey, please visit our flower store.