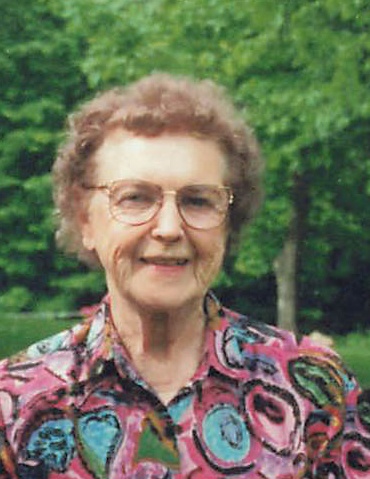 Funeral services for Edna Bratton of Morris, will be held on Friday, October 22, 2021 at 10:30 a.m. at Trinity Lutheran Church in Cyrus, with Reverend Chris Richards officiating.  Visitation will take place one hour prior to the service.  She will be laid to rest next to her husband at Scandia East Cemetery, rural Cyrus.

Edna Ihlene Helgerson was born May 18, 1919, to Peter and Clara (Rustad) Helgerson. She was baptized and confirmed at Trinity Lutheran Church in Cyrus, MN. She graduated from Cyrus High School in 1937. Edna later moved to the twin cities to work before attending Concordia University to pursue a teaching degree. After receiving her degree, she went on to teach at two country schools.

Edna was united in marriage to Ralph Bratton on September 28, 1946, in Cyrus MN. Establishing a farm in Framnas Township, Edna and Ralph went on to have four children. They farmed for 37 years until retiring to Lake Latoka outside of Alexandria, MN in 1984. Her beloved husband, Ralph, passed away in 1995. In 1997, Edna moved to West Central Christian Homes. In 2013, she moved to West Wind Village, where she lived out the remainder of her blessed life.

Edna was a member of Trinity Lutheran Church in Cyrus, where she was active in the Ladies Aide and taught Sunday school. She enjoyed sewing, traveling, playing cards and bingo at the nursing home. Edna had an enduring spirit and will be remembered as a nurturing soul by many friends, family, and loved ones. She will be deeply missed by all who knew her.

Edna passed away peacefully on Saturday, October 16, 2021, at West Wind Village in Morris, MN. She was 102 years old.

Edna is survived by her sons: Daniel, Wesley, and Rodney (Ruth) Bratton all of Morris; nine grandchildren: Jason (Ali Lorensen) Bratton, Jodie Bratton, Melissa (Darin) Biamonte, Michael (Tracy Truenow) Bratton, Christopher Bratton, William (Christina) Bratton, Steven (Crystal) Bratton, Ethan (Jenna) Bratton and Joshua (Tamara) Bratton; 12 great-grandchildren; as well as many nieces and nephews. She was preceded in death by her husband: Ralph; her parents; one son: Duane Bratton; two brothers: Harvey and Ernest Helgerson and two sisters-in-law: Phyllis Helgerson and Laverne Kraft. While her family on earth grieve, Edna is surely rejoicing in Heaven to be reunited with those that went before.

To order memorial trees or send flowers to the family in memory of Edna Bratton, please visit our flower store.