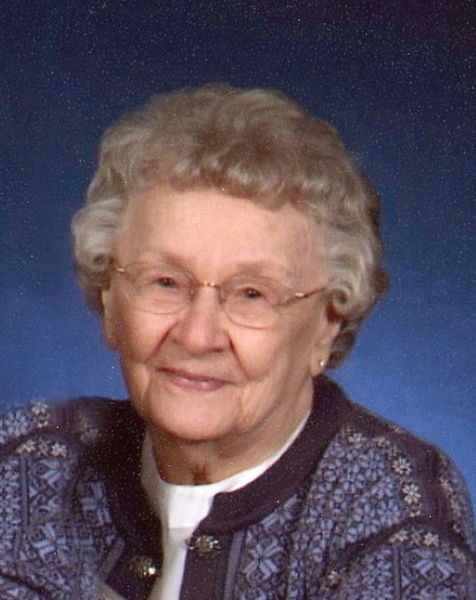 The memorial service for Edna H. Carlson, of Morris, Minnesota will be held on Wednesday, August 3, 2016 at 2:00 p.m. at St. John's Lutheran Church, near Starbuck, Minnesota, with Reverend Angel Scott officiating. Visitation will be on Tuesday from 6 to 8 p.m. at the Pedersen Funeral Home in Morris and Wednesday, one hour prior to services at the church. Burial will be held at a later date at Valley Grove Lutheran Cemetery, near Nerstrand, Minnesota.

Edna's formal education began in a rural school in the Frost area and continued in the public school in Kelliher, Minnesota. She graduated from Kelliher High School as the class valedictorian in 1937. Edna continued her education at Concordia College, Moorhead, MN, graduating in 1941 with a BA in English. While in college, Edna studied music and together with her brother Orvis, performed in a Shakespearian Drama.

Edna's teaching career included stops at Villard, Rushford, Crosby-Ironton and Graceville, Minnesota. Her 22 year career was interrupted to raise a family of five children. She was a wonderful mother and homemaker. Edna was a talented seamstress and enjoyed knitting and hardanger embroidery. She was also a great conversationalist with a subtle sense of humor. She and Truman shared an avid interest in genealogy, which led to a re-acquaintance with distant relatives in Norway.

In her retirement years, Edna enjoyed spending time with her children and grandchildren. She had a "green thumb" and found much enjoyment in her African violets, and her outdoor rose and wildflower gardens. She and Truman enjoyed many years of quiet solitude at their family lake home near Vergas, Minnesota. They also enjoyed traveling in the U.S. and two treasured trips to Norway – meeting relatives there for the first time. Participation for nine years in the Scandinavian folk dance group, the Norskfödt Danseringen, added zest to their retirement years. They valued the friendship and camaraderie of the "coffees" with the retired teachers.

Edna died on Friday, July 29, 2016 at the Stevens Community Medical Center in Morris. She was 95 years old. Edna Carlson
To order memorial trees or send flowers to the family in memory of Edna Carlson, please visit our flower store.