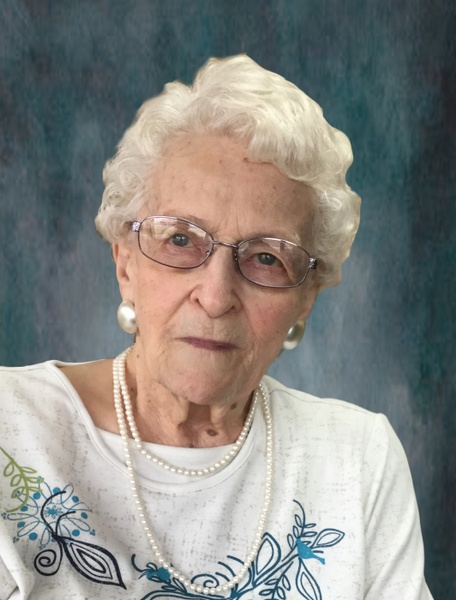 Funeral services for Edna Knopp of Starbuck, Minnesota, formerly of Alberta, Minnesota, will be held Thursday, May 10, 2018 at 11:00 a.m. at Zion Lutheran Church in Morris, Minnesota, with Reverend Jack Baumgarn officiating.  Visitation will be one hour prior to services at the church on Thursday.  Burial will be in Synnes Cemetery near Alberta.

Edna Matilda Bertha Katherine Boldenow, daughter of Ludwig and Henrietta (Roth) Boldenow, was born on March 27, 1918 in Union Township, Iowa.  She was baptized on April 21, 1918 by W.G. Potratz in Germantown, Iowa. When Edna was young, her family made their home on a farm south of Chokio.  She was confirmed at Trinity Lutheran Church in Synnes Township. Edna attended and graduated school from Ortonville High School.  On April 12, 1939, Edna was united in marriage to Adolph Knopp at Trinity Lutheran Church, Synnes Township, Minnesota.  The couple moved to a farm near Alberta where they raised their four children.  In 1956, Edna began working as a Certified Nurse Assistant at the Stevens Community Medical Center, where she worked for 33 years.  In 1958, Edna and Adolph moved to Alberta.  Adolph died February 13, 2002. In April of 2006, Edna moved to the Minnewaska Lutheran Home in Starbuck, where she continued to live until the time of her death.

Edna was a member of Zion Lutheran Church of Morris and LWML. She was also a member of the Merrifew Homemakers Club.  She enjoyed flower gardening and genealogy.  Edna also liked playing cards and putting puzzles together.  Most importantly, Edna loved spending time with her family.

Edna died Thursday, May 3, 2018 at the Minnewaska Lutheran Home in Starbuck, Minnesota, having reached the age of 100 years, one month and six days.

To order memorial trees or send flowers to the family in memory of Edna Knopp, please visit our flower store.