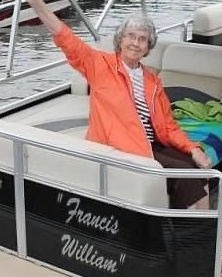 Funeral services for Eileen Lembcke, of Morris, will be held on Monday, October 3, 2022 at 10:30 a.m. at Assumption Catholic Church in Morris.  Father Todd Schneider will be celebrating the mass.  A Visitation will be on Sunday, October 2, 2022 from 5 to 7 p.m. at Pedersen Funeral Home in Morris with a prayer service starting at 7:00 and the Rosary to follow. Visitation will continue one hour prior to the service at the church on Monday.  Burial will be at Calvary Cemetery in Morris.

Eileen Ann Selk, daughter of Fred and Marie (Logan) Selk, was born January 15, 1932 in Morris, Minnesota.  She was baptized and confirmed in the Catholic faith.  Eileen grew up and attended school in Morris, graduating from Morris High School.  Following graduation, Eileen attended business school in the twin cities.  On June 23, 1954, she was united in marriage to Francis Lembcke at Assumption Catholic Church in Morris.  The couple made their home in Morris, where they raised their family.  Eileen later worked at the Stevens County Court House and as secretary at St. Mary’s Catholic School.  After Eileen and Frank’s retirement, they enjoyed spending the winter months at their home in Apache Junction, AZ for many years. Frank passed away September 10, 2011.  Eileen continued to live in Morris until the time of her death.

Eileen was a member of Assumption Catholic Church and several bridge clubs.  She loved playing cards, especially bridge and 500.  She enjoyed traveling, bus trips, watching the Minnesota Twins and hosting and attending coffee parties.  Most of all, Eileen cherished her family.  She was very proud of her children, their spouses, grandchildren and great-grandchildren, and loved spending time with them.

Eileen passed away Tuesday, September 27, 2022 at West Wind Village in Morris.  She was 90 years old.

Pedersen Funeral Home in Morris is in care of the arrangements for Eileen.
To order memorial trees or send flowers to the family in memory of Eileen Ann Lembcke, please visit our flower store.