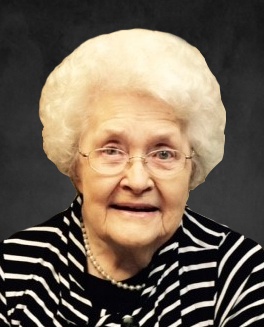 Funeral services for Elaine Jacobson of Morris, formerly of Hancock, MN will be Thursday, February 6, 2020 at 11:00 a.m. at St. John's Lutheran Church in Hancock, MN, with Reverend Bruce Hanneman officiating. Visitation will be Wednesday from 5 to 7 p.m., with a prayer service at 7:00 at the Pedersen Funeral Home in Morris and for one hour prior to services at the church on Thursday. Burial will be in Lakeside Cemetery in Hancock.

Elaine Angeline Anderson, daughter of Elmer and Anna (Anderson) Anderson, was born on the family farm in New Prairie Township, near Cyrus, Minnesota, where she grew up and attended school.  She was united in marriage to James Burns in September of 1939.  The couple made their home in Hancock, where they raised their family of four children, JoAnne, Jack, Judy and infant daughter.  Elaine worked as a clerk at Bells Supermarket and Matson Drug Store in Hancock before going to work at the University of Minnesota Morris, until her retirement.  James passed away August 29, 1976.  On January 13, 1990, she was united in marriage to Ervin Jacobson at St. John’s Lutheran Church in Hancock.  The couple continued to live in Hancock.  Ervin passed away January 31, 2009.  Elaine later moved to Morris, where she continued to live until the time of her death.

Elaine was a member of St. John’s Lutheran Church in Hancock, where she was involved with the Ladies Aide.  She was also a member of the Hancock Senior Center.  She enjoyed fishing and spent many winters with her husband Ervin in Apache Junction, Arizona.  Elaine was always willing to help others. Most of all, she loved spending time with her children, grandchildren and great-grandchildren.

Elaine died peacefully surrounded by her family on Sunday, February 2, 2020 at the Courage Cottage in Morris. She was 96 years old.

To order memorial trees or send flowers to the family in memory of Elaine Jacobson, please visit our flower store.