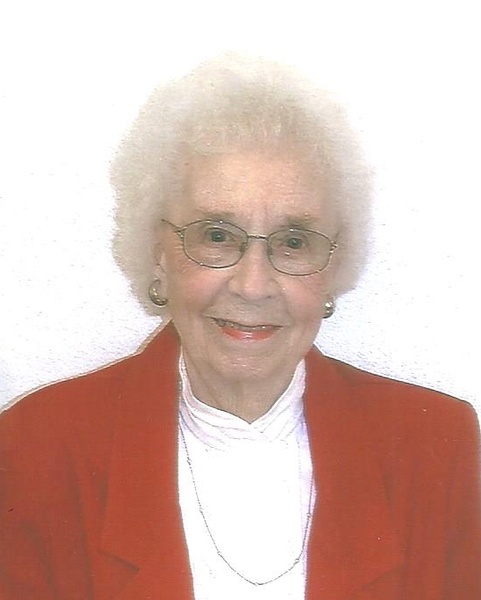 The funeral service for Elsie Lesmeister of Morris, Minnesota will be held on Wednesday, July 6, 2016 at 10:30 a.m. at Assumption Catholic Church in Morris. Celebrant for the service will be Father Todd Schneider. Visitation will be held one hour prior to the service at the church. Elsie will be laid to rest next to her husband, Ray, at the Lakeside Cemetery in Herman, MN.

Elsie Mary Raths was born on October 7, 1919, in Herman, MN, to Jean Pierre (Jim) Raths and Katharina (Gorgen) Raths who immigrated to the area from Mersch, Luxembourg after their marriage. Elsie was the seventh of eight children. She spent her childhood on the family farm near Herman and attended school through the eighth grade. On February 20, 1938, she married Raymond Otto Schuman. To this union two children were born - Judith and Richard. After Raymond's death, she married Roy Lesmeister and became stepmother to Dennis, Janice, Richard, and Judy. Elsie was a dedicated mother, homemaker, farmhand, and nurses aid at the Wheaton Nursing Home. She also babysat many years for the Linden Churchill and John Aanden families.

She enjoyed playing cards with family and friends and attending dances. She had a big garden for many years and raised spring fryers to sell. She also sold many quarts of strawberries and raspberries plus many bushels of cucumbers while the Gedney plant was buying them in Herman.

She is survived by her children: Richard (Gail) of Fayetteville, GA, Judith Hansen of Nampa, ID; stepchildren: Dennis of Moab, UT; Janice Tolifson of Alexandria, Richard (Dottie) of Rockford, MN, and Judy Neuman of Herman. She is also survived by five grandchildren: Stephanie (Bob) McDonald of Caldwell, ID, Katia (Dan) Gillis of Nampa, ID, Ryan of Franklin, TN, Scott of Washington, DC, and Brian (Jennifer) Goodson of Newnan, GA; three great-grandchildren; one brother: Rudy of Alexandria; and many nieces and nephews. Elsie was preceded in death by her parents; her two husbands: Raymond and Roy; and six siblings: Margurite, Emile, Marcelles, Leo, Leona, and Emma.

Pedersen Funeral Home in Morris, is in charge of the arrangements. To order memorial trees or send flowers to the family in memory of Elsie Lesmeister, please visit our flower store.