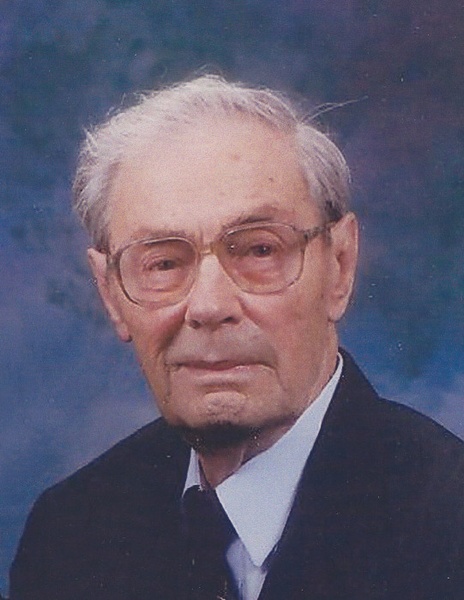 Ervin Joseph Van Kempen, son of Peter and Laura (Blair) Van Kempen, was born October 6, 1918 at his home in Pine River, Minnesota.  He grew up and attended school in Pine River.  At the age of 18, he joined the Civilian Conservation Corp near Blackduck, Minnesota with his twin brother Orville.  In 1938, Ervin moved to Morris, Minnesota where he met his wife Ruby.  He was united in marriage to Ruby Aaberg on November 8, 1941 in Waukesha, Wisconsin.  Shortly after their marriage, Erv joined the United States Army Air Corp. While at Basic Training in Champagne, Illinois, his son Ron was born.  He was later shipped to the South Pacific where he served during World War II.  He was honorably discharged on October 11, 1945 and returned home to Morris, Minnesota.  Upon his return, Ervin worked as a carpenter in the Morris and Benson area with his father, building a house in Benson in 1947.    In 1951, the family moved to Minneapolis, Minnesota where Ervin and Ruby raised their family of five sons.  Ervin continued working as a carpenter until the age of 62.  Following his retirement, Ervin and Ruby moved to Starbuck, Minnesota where Erv built a house.  Erv continued to live in Starbuck until the time of his death.

Erv was a long time member of the Starbuck V.F.W. He was proud of his service during World War II, where he was decorated with many awards. He enjoyed hunting, dancing, playing games, bingo, going to the casino, and playing cards, cards and more cards.  Ervin and Ruby loved to travel, and were able to visit 47 of the 50 states in their 5th wheel.  Most of all, Ervin enjoyed spending time with his family.

The family of Ervin Van Kempen would like to thank the wonderful staff at Glacial Trails Memory Care in Starbuck for their compassionate care of Ervin this past year.

To order memorial trees or send flowers to the family in memory of Ervin Vankempen, please visit our flower store.