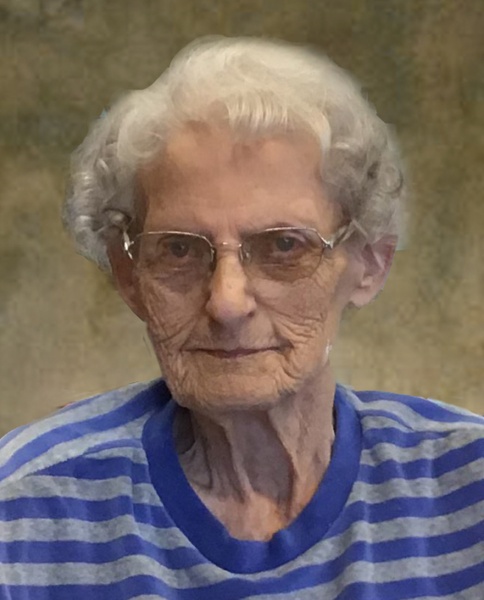 Funeral services for Esther Jergenson, of Starbuck, will be held on Thursday, February 21, 2019 at 11:00 a.m. at Fron Lutheran Church in Starbuck with Reverend Paul Johnson officiating.  Visitation will be on Wednesday, February 20 from 5:00 - 7:00 p.m. at the Starbuck Funeral Home in Starbuck and will continue one hour prior to the services at the church on Thursday.  Burial will be at Fron Lutheran Church Cemetery, rural Starbuck.

Esther Marie Swenson was born on October 1, 1929 in Butte, Montana to Harold Martinez and Gina Mathilda (Gulsvig) Swenson.  She was baptized into her Lutheran faith in Montana.  At the age of 3, after Esther’s mother died, she moved to rural Glenwood where she lived with her Uncle and Aunt, Knute and Rose Braaten.  She attended country school until the 8th grade in Rolling Forks Township and was confirmed at Chippewa Falls Lutheran Church.  After her schooling, Esther helped on the farm with chores and milking cows.  On July 22, 1945, Esther was united in marriage to Vernon Jergenson at the Glenwood Lutheran Church Parsonage in Glenwood.  They made their home on a farm in Rolling Forks Township and welcomed four children.  In 1958, the family moved to Starbuck, Minnesota.  After the children were in school, Esther started working as a Nurse’s Assistant at the Lakeview Care Center in Glenwood until a back injury forced her into retirement in 1975.  In 1969, they moved to their home in the northeast part of Starbuck where they lived until March of 2018 when they became residents of the Minnewaska Lutheran Home.  Vernon preceded Esther in death on October 20, 2018.

Esther was a member of Fron Lutheran Church in Starbuck and in later years she volunteered at the Minnewaska Lutheran Home, helping with bingo every Tuesday.  Esther enjoyed crocheting, needle point and was an avid reader until the time of her passing.

Esther died peacefully on Saturday, February 16, 2019 at the Minnewaska Lutheran Home in Starbuck, she was 89 years old.

Starbuck Funeral Home in Starbuck is in charge of arrangements for Esther, to send an on-line condolence to the family, visit www.starbuckfh.com.

To order memorial trees or send flowers to the family in memory of Esther Jergenson, please visit our flower store.