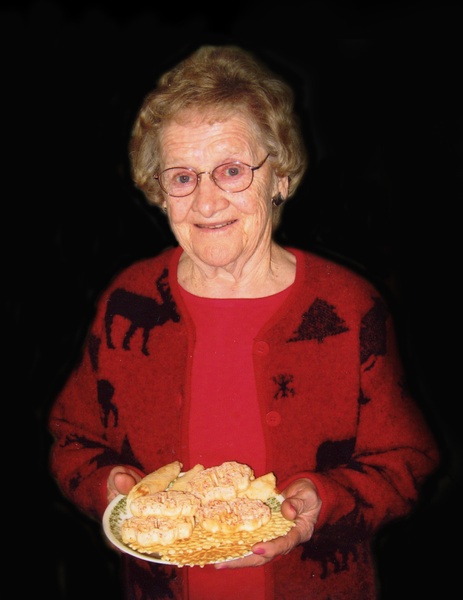 Funeral services for Esther Tharaldson of Starbuck, MN will be held Monday, October 31, 2016 at 11:00 a.m. at East Zion Lutheran Church, rural Starbuck. Reverend Donald Berheim will be officiating. Visitation will be held Sunday from 5 to 7 p.m. at the Starbuck Funeral Home and for one hour prior to services at the church on Monday. Burial will be in the church cemetery.

Esther Adeline Jergenson, daughter of George and Mabel (Johnson) Jergenson, was born June 26, 1924 on the family farm in Rolling Forks Township in Pope County, Minnesota. She attended Pope County District 51 Country School until the first grade and graduated from Pope County District 14 Country School. Following her schooling, Esther worked for the Russell Davidson family caring for their children, and also continued to help on the family farm. She was united in marriage to Odean Tharaldson on July 19, 1945 at the Rolling Forks Parsonage in Terrace, MN. The couple made their home on a farm south of Starbuck where they raised their family of four daughters. Esther worked hand in hand with Odean on the farm for many years. Odean died March 9, 1996. Esther continued to live on the farm until 2008 when she moved to Holly Ridge Assisted Living in Starbuck. In 2012, Esther moved to the Minnewaska Lutheran Home in Starbuck, where she continued to live until the time of her death.

Esther was an active member of East Zion Lutheran Church. She enjoyed making quilts and sending them to missions. She also enjoyed playing whist, bingo, and cooking. She was an excellent cook and was known to make Scandinavian foods, such as meatballs, lutefisk, lefse, rosettes, and krumkaka for all to enjoy. She enjoyed being outdoors, especially gardening and fishing. She also looked forward to the annual deer hunting season that she shared with her family. Esther was very proud of her Scandinavian heritage, and will be remembered for always being kind, working extremely hard, and always doing her best. Most of all, Esther loved spending time with her family and spoiling her grandchildren that she loved with all of her heart.

Esther died Thursday, October 27, 2016 at the Minnewaska Lutheran Home in Starbuck. She was 92 years old.

To order memorial trees or send flowers to the family in memory of Esther Tharaldson, please visit our flower store.