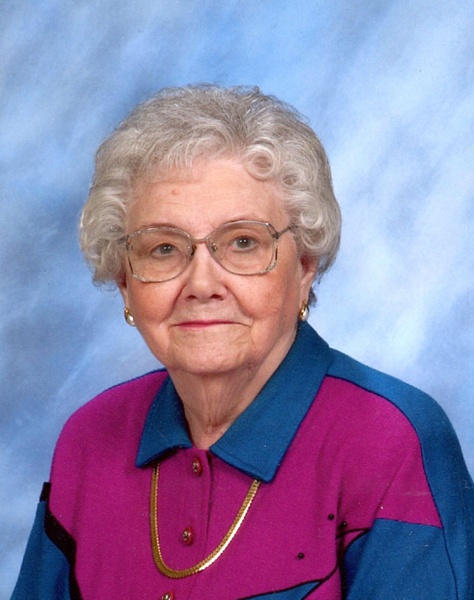 Memorial services for Florence Loher of Morris, Minnesota, will be held on Saturday, May 11, 2019 at 11:00 a.m. at Assumption Catholic Church in Morris.  Celebrant for the mass will be Father Todd Schneider.  A visitation will begin at 10:00 a.m. at the church and burial will be at Calvary Cemetery in Morris. The family welcomes MN Twins apparel to be worn to Florence's celebration of life service.

Florence Margaret Bresson, daughter of Alfred and Kunda Gunda (Bertamus) Bresson, was born on January 24, 1923 in Canby, Minnesota. Florence attended Yellow Medicine Country School through 8th grade before moving with her family to Morris.  She graduated salutatorian from St. Mary’s High School in 1942.  Following her graduation, Florence was employed at St. John’s Hospital in Fargo, ND before returning to Morris to work at the Citizen’s Bank.  She was united in marriage to Raymond H. Loher on May 4, 1943 at Assumption Catholic Church in Morris by Monsignor Fearon.  Ray and Florence continued to live in Morris to work and raise their family.

In Florence’s youth, she enjoyed playing girls softball. She was a member of Isovis softball team that participated in the state tournament. Florence loved sports, she especially enjoyed the Minnesota Twins and cheering for her grandchildren at their high school sporting events.  She also enjoyed playing cards, dancing and quilting.

Florence’s life was drastically changed in the winter of 1963 when Ray and her oldest son, Bob, were in a serious accident.  Due to Ray’s disability from that accident, Florence went to work full-time at Sears & Roebuck.  She retired from Sears in 1982. Upon retirement, she became more involved in church activities.  She sang in the choir, served as a Regent for the Daughters of Isabella (D of I), helped organize and became a 12-year member of the Befrienders Program and served on several other Assumption Church Committees.  She was an initiator and charter member of the St. Mary’s School Education Fund Committee.  Florence was a member of St. Martin Mission Circle for 20 years; her kids always say they should have counted the quilts she made for the mission. Following Ray’s death in 1984, Florence remained in Morris and was always busy. She loved to spend time with her grandchildren, play bridge, and volunteer at the West Wind Village and the Stevens Community Medical Center gift shop. She enjoyed traveling with friends and family to Medjugorje, Yugoslavia, Hawaii, Alaska, Canada and various places in the continental U.S.

Florence considered her lifelong commitment and devotion to her family her greatest accomplishment. Her warm, loving personality was infections and she had a huge impact on many lives. She had so much energy and enthusiasm; she simply enjoyed life to the fullest.  Florence had a very close relationship with God and this helped carry her through the difficult times, as well as many wonderful times in her life.

The family wishes donations to me made to Knute Nelson Hospice.

To order memorial trees or send flowers to the family in memory of Florence Loher, please visit our flower store.