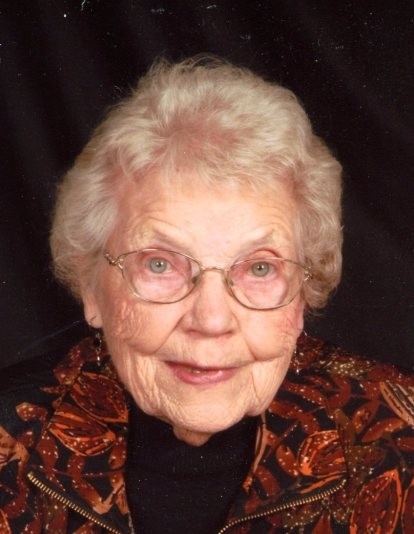 Funeral services for Frances Wernsing will be on Saturday, April 21, 2018 at 11:00 a.m. at Our Savior's Lutheran Church in Chokio.  Visitation will be on Friday from 4:00 - 7:00 p.m. at Pedersen Funeral Home in Morris and will continue one hour prior to the service at the church on Saturday.  Reverend Gloria Anderson will be officiating.  Burial will be at Summit Cemetery in Morris.

Frances Lorraine Christensen was born on October 20, 1923 to Chris and Hanna (Wilson) Christensen on a farm north of Chokio, Minnesota.  She was baptized on March 2, 1924 in Iowa and confirmed on March 13, 1938 at Zion Lutheran Church in Chokio.  She attended District 43 Country School in Everglade Township north of Chokio.

On February 3, 1945 Frances was united in marriage to Earl Julius Wernsing.  The wedding took place at her parent's farm where she was born and raised.  After marrying Earl the couple moved to Earl's family farm west of Chokio.  Frances worked alongside Earl farming around Baker Township and raising hogs as well as other livestock.  After a successful farming career and raising three children they retired in 1984 and moved into Chokio.

Frances was a member of Our Savior’s Lutheran Church where she was active with Our Savior’s Women and teaching Sunday school.  She was a member of the Baker Homemakers for over 60 years, a member of the Till & Tell Garden Club in Chokio and served as a 4-H leader as well.  Her interests include bowling, traveling, playing cards, watching sports, being at Lake Amelia, gardening, crocheting and spending time with friends and family, especially her grandchildren and great grandchildren.

Frances passed away at her home at the Minnewaska Lutheran Home in Starbuck on Friday, April 13th surrounded by loved ones.  She had lived to reach the age of 94 years.

Pedersen Funeral Home in Morris is in charge of arrangements for Frances.

To order memorial trees or send flowers to the family in memory of Frances Wernsing, please visit our flower store.