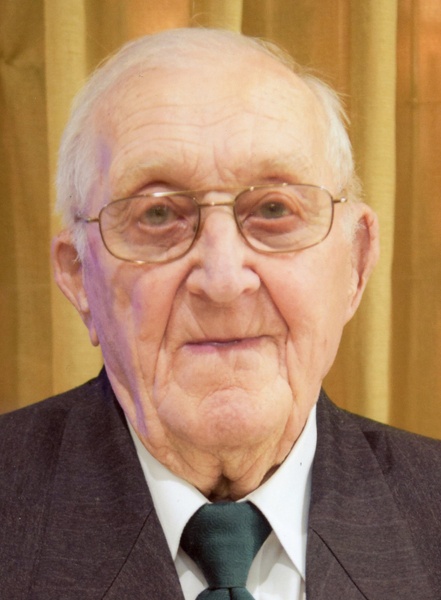 Funeral Services for Fred Sperr will be held on Monday, April 5, 2021 at United Methodist Church in Herman at 10:30 a.m. A public visitation will be held one hour prior. Reverend Heather Klason will be officiating. Following the service, burial will be held at Lakeside Cemetery, with lunch to follow at the Herman Community Center.  A public visitation will also be held on Sunday at the Pedersen Funeral Home from 4:00-7:00 p.m. with a Time of Sharing starting at 6:30 p.m. Art Abel will be officiating the Time of Sharing.

While maintaining social distancing guidelines, the seating at the church will be limited. The use of face masks by attendees is required , and we will continue taking the necessary steps to keep our facility clean. For those who prefer or require continued precautions, webcasting and/or livestreaming is available in most situations.

Fred Julius Sperr was born to John and Lena Wille Sperr on October 9, 1920, the second of what would become twelve children. Fred was baptized on his first birthday by Gustav A. Pilgrim at St. John’s Lutheran Church in Donnelly, MN. Fred went to first grade at the District 64 school house, and when the family moved in 1928 several miles to the southwest they were near the District 63 school house, where Fred would continue his schooling through the eighth grade. After graduating, Fred continued to work on the family’s grain and dairy farm for three years. One morning in 1938, just as he was nearing his 18th birthday, he woke up and decided it was time to leave home and find work elsewhere. He walked until he ended up on the farm of friends of his parents. That led to a series of jobs working for farmers in the Donnelly area, some of whom were relatives shoveling corn, shocking grain, plowing, or picking and shucking corn by hand and just doing regular farm work. After about six months with a little money in his pocket, he ventured to Dakota County, where his mother had relatives and again worked with farm families doing the usual chores and a little carpentry. In December of that year, Fred received a letter from his mother stating she was in bad health and asked him to think about coming home to help. He returned home to the Donnelly area where he continued to work for local farmers and relatives.

It was during this time that Fred began his courtship that would last for over three years with Christine Backman. Both loved to dance and would go out waltzing two or three times a week. In 1943, Fred proposed to his sweetheart and on June 6, 1944, (D-Day) they were married at the United Methodist Church in Herman, MN. Soon thereafter, the couple started farming on their own in the Herman and Hoffman areas. Fred considered 1947 one of his best years in farming which allowed him to buy a new Studebaker car and a new truck the next year. After a dry year in 1965, Fred decided to give up farming and try his hand at something else.

Fred and Christine moved to Alberta, MN, where Fred was hired at the GTA Elevator and within three years became the manager, a position he held for five years. In 1972, Fred and Christine made their last move to Chokio, MN. Fred remodeled and built on a large edition to a 100 year old home with very basic tools and very little help making a very comfortable home for his family of which he was very proud.

For five years, Fred drove school bus and worked at the pool for Chokio-Alberta Schools. During this sametime he also worked for the Armour Hog Buying Station picking up hogs from local farmers. Missing working the land, Fred accepted a job in 1978 as a hired hand for local farmer, Dennis Wernsing. It was there he spent the last years of his working life once again driving tractor and working the fields.  At age 72 he retired from full-time farm work. Fred kept himself busy working as a part-time custodian along with Christine for the Chokio Bank and also did wood working, which he discovered he had a knack for. Being a hard worker his entire life, Fred could never just sit down.  He loved working in his yard, mowing and gardening.  He loved to can pickles, tomatoes, cherry and peach sauce and made hundreds of jars of rhubarb jam in which he loved to share with others.  He was known as “Krautmaster Fred” for the many thousands of jars of sauerkraut he cut and canned. Fred also helped several friends learn the process of sauerkraut making.  Fred was very proud of the ribbons he earned at the local county fairs with his canning and woodworking pieces.

Fred loved music and singing with his daughters through their younger years.  When Fred was six years old, he received a 5-key harmonica for Christmas.  Later he needed a bigger harmonica and until the most recent months, played for the last 95 years of his life, playing for friends, church services and even at some funerals.

Fred and Christine were proud parents of their five daughters, Corlys Behan, LuAnn Honkomp, Louise Christians, ArLou Flannigan and Janet Staebler.  Fred and Christine were also blessed with 16 grandchildren and 24 great-grandchildren.  One of Fred’s proudest accomplishments was his marriage of 70 years to Christine.  He stated recently that they had some hard years, but more good than bad.  I’ve had a good life, he said.  Fred passed away March 27, 2021 at the age of 100.

To order memorial trees or send flowers to the family in memory of Fred Sperr, please visit our flower store.