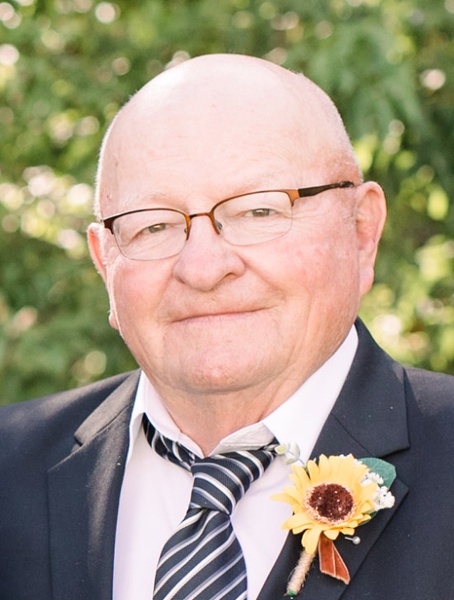 Funeral services for Gary Marquart, of Hancock, MN will be held on Sunday, April 25, 2021 at 2:00 p.m. at the Trinity Lutheran Church - Fairfield Township with Reverend Donald Klatt officiating.  Visitation will be on Saturday, from 3:00 - 5:00 p.m. at the Pedersen Funeral Home in Morris and for one hour prior to the services at the church on Sunday.  Burial will be in the church cemetery.

There will be a live stream of Gary's service starting at 2:00 p.m. on Sunday, April, 25, 2021.  To view the service on the Pedersen Funeral Home website, scroll to the bottom of Gary's obituary page and click the link.

**Please note - The use of face masks by attendees is required, and social distancing will be followed. For those who prefer or require continued precautions, webcasting and/or livestreaming is available in most situations.

Gary Nolen Marquart was the fourth child born to Henry and Ida (Gades) Marquart on May 29, 1943, in Benson, Minnesota.  Gary was raised in Tara Township, Swift County, Minnesota and attended Trinity Lutheran Church – Fairfield Township with his family where he was baptized and confirmed.   Gary received his education at a country school until the 7th grade and then Holloway school, graduating with the class of 1961.  After graduation, Gary began his farming career with his brother and father.  On September 13, 1975, he was united in marriage to Russella “Rusty” Olson in Chokio, Minnesota.  Following their marriage, they made their home in Tara Township and welcomed two sons: Cory and Kirby.  He farmed his whole life and remained on the family farm.

In his earlier years, Gary played football, softball for the Suckow DeKelb and played baseball with the Hancock Orphans, where he earned the nickname “Wheels.” He enjoyed watching his boys play sports from little league to high school and then college.  Gary looked forward to his hunting trips for Elk out west, as well as hunting of any kind.  He was a trapper and was one of the last people in this area who practiced the craft of skinning animals. Gary enjoyed his mornings with breakfast and a good card game at the Good Ole Days Café in Holloway; and the occasional trip to the casino!  Gary was a lifelong member of Trinity Lutheran Church in Fairfield Township and held various offices throughout the years and was on the Tara Township Board for several years.  Most of all, Gary enjoyed the time that he was able to spend with his family and will be fondly remembered for his go-to lines “I don’t know” and “You bid too much!”

Gary died on Wednesday, April 21, 2021 at Abbott Northwestern Hospital in Minneapolis, he was 77 years old.

Gary is survived by his wife, Rusty of Hancock; and his two sons: Cory, his wife, Tammy and their daughters: Jaedyn and Josie and Kirby, his wife, Ashley and Baby M coming in June; his mother-in-law, Hazel Olson of Morris;  sisters-in-law: Nancy (Harvey) Gillespie of Chokio and Nancy Olson of Slayton; and many nieces, nephews, great-nieces, and great nephews.  He is preceded in death by his parents: Henry and Ida; brother and sister-in-law, Byron and Elvera Marquart; sisters and brothers-in-law: Ada Mae and Archie Mesenbrink and Marion and Ray Pugh; brother-in-law, Clifford Olson. and nephew Danny Mesenbrink.

Pedersen Funeral Home in Morris is in care of arrangements for Gary.

To order memorial trees or send flowers to the family in memory of Gary Marquart, please visit our flower store.