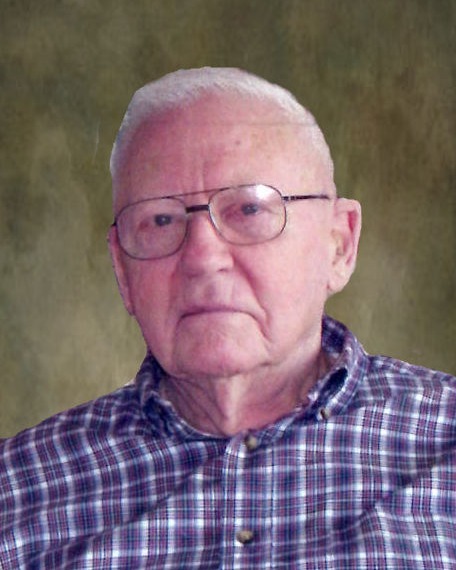 George was born on March 21st, 1927 to George and Minnie Erlandson (Holen) on the family farm near Lowry, the youngest of six siblings.  After completing High School and a year at Augsburg College, George enlisted in the US Army and served his time in the Panama Canal Zone being discharged in January 1947.  Following this George began farming near Lowry, and in October of 1950 married Kathleen Jenkins Reaume in Windsor, Ontario.  This brought a 7 year old son into George’s care and three children followed through that decade.

George and Kathleen farmed until 1966 and he transitioned from milking cows to selling Dairy Equipment.  His summary of this was that of “changing boats in mid-stream”.  He also worked seasonally as a Pope County Township Assessor and this became a forty year sideline career for him.

George’s greatest care in life was the moral well being of his household.  He typically did not view himself as being up to the task, but he provided guidance for each of his family.  He was predeceased by his parents, siblings, and step-son, Robert.  He is survived by his wife, Kathleen, sister-in-law, Ellen, daughter-in-law, Barb; children, Mark (Beth), Brad (Phyllis), and Martha (Darrel) Kollman; grandchildren, Andrew (Kendall), Leah (Mike), Jessica (Kirtipal), Eric, Evan (Katie), Bethany (Franklin), Abigail (Karsten), Andrew, Ruth (Joshua), and Ryan (Megan).  The next generation is comprised of twenty one souls – Reagan, Aubrey, Alex, Jakob, Hope, Violet, Danny, Faith, Owen, Elliot, Marygrace, Henry, Colton, Silje, Russell, Soren, Thor, Ava, Anna, Maci, and most recently, McKenna.

A public memorial service will be held on Saturday, December 3, 2022 at 11:00 a.m. at the Glenwood Retirement Village Chapel in Glenwood, Minnesota with lunch following.  A private family burial was held on Thursday, November 10, 2022.

To order memorial trees or send flowers to the family in memory of George Luverne Erlandson, please visit our flower store.