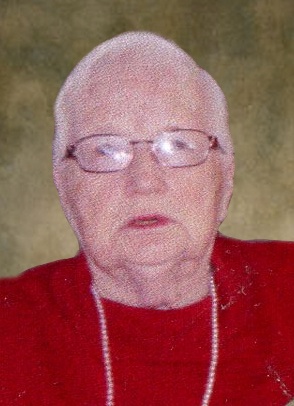 Funeral services for Grace Steuck of Chokio, MN will be held Monday, March 18, 2019 at 11:00 a.m. at Our Savior’s Lutheran Church in Chokio, MN, with Reverend Minette Stalheim Johnson officiating. Visitation will be one hour prior to services at the church on Monday. Burial will be in Frog Lake Cemetery, rural Alberta at a later date.

Grace Ione Steuck was born June 13, 1932 to Roy and Josie (Jensen) Banister at their farm in Stevens County, where she attended country school through the 8th grade. Grace was united in marriage to Earl Steuck on November 25, 1948 at Earl’s family farm, which they later lived on and raised their eight children. During their 70 years of marriage they farmed their family farm, which included Grace collecting a chicken egg or two or milking cows; in addition to being a farmers wife and mother she had several other jobs which included: sewing purses, being a nursing assistant, working at the local clothing bank, needlework and volunteering at West Wind Village, where she would pop popcorn and do mending.

Grace could always be found on the dance floor with Earl, dancing a polka or two, or out in her sewing room sewing a zipper on a coat or making a new outfit. Grace was a member of Our Savior’s Lutheran Church in Chokio and an avid member of the local Eagles Auxiliary, serving as president, past president, district president and past president. She also served on the West Central Community Action Board.

In 1983, Earl and Grace moved off the farm to their home in Chokio, where they lived for 34 years. They then moved to Morris, where they lived together at the Legacy Assisted Living, until Earls health made him move to West Wind Village. Grace continued to live at the legacy and would drive out to see Earl every day, as long as the weather allowed her to.

Grace passed away unexpectedly on Tuesday, March 12, 2019 at the St. Cloud Hospital in St. Cloud, MN, surrounded by her family. She was 86 years old.

To order memorial trees or send flowers to the family in memory of Grace Steuck, please visit our flower store.