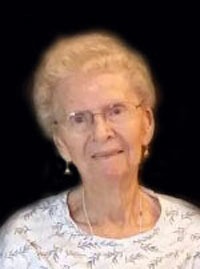 Helen Faaberg Ness, daughter of Guttorm and Guro (Faaberg) Ness was born on September 5, 1919 on a farm in Lac qui Parle County near Louisburg, MN. She was baptized into the Lutheran Faith. At the age of three the family moved to Appleton, MN where she spent her childhood days growing up, helping with family work and attending church and school. Her Norwegian immigrant parents raised her to value faith, family, education and hard work. She was confirmed at Zion Lutheran Church in 1934 and graduated from Appleton High School in 1938.Following high school she attended Dawson Hospital School of Nursing. In 1941 she moved to Starbuck, MN where she began her career as a nurse at the Minnewaska District Hospital. She was united in marriage to Harris Tessem on December 28, 1945. To this union Michael, Ruth and Jane were born. Harris passed away in 1955. On December 29, 1958 Helen was united in marriage to Robert Bjorgo and one child, Roberta was born. Robert passed away in 1960. Helen continued to work at the hospital and in 1970 began working at the Starbuck Clinic. Nursing was her true calling and she was well known by the patients for her compassionate care and fun-loving personality. Helen spent most all of her time working and raising her three daughters on her own. She retired from nursing when she was in her early 70's.

Helen was a member of Fron Lutheran Church where she was active in Ladies Aid and was a member of the Starbuck VFW Auxilliary. She enjoyed reading, knitting, crocheting, baking, bowling, watching westerns, going shopping in Alex and going for car rides. She was able to enjoy some traveling and some of her trips included England, Greece, Crete, Belgium and Hawaii. She loved to converse in Norwegian with those who knew the language. Helen especially enjoyed spending time with family and friends.

Helen passed away Sunday, February 5, 2017 at Holly Ridge Manor in Starbuck, MN. She was 97 years old. To order memorial trees or send flowers to the family in memory of Helen Bjorgo, please visit our flower store.